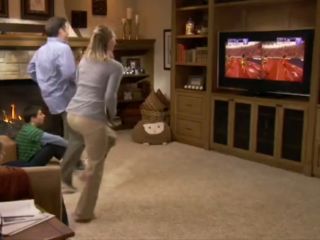 Microsoft's CEO Steve Ballmer has suggested in an interview that the Xbox is for boys and the Kinect add-on is for girls.

"I want that average 15-year-old girl as excited about the Kinect, and we haven't done as good a job drawing in that broader set of demographics."

It's an opinion that will no doubt send tremors through anyone in the Xbox PR team tasked with making the Kinect more appealing to traditional gaming demographics.

Although the Kinect was a key addition in terms of broadening the appeal of the Xbox – the party line to date has been that the nifty motion/voice controller will appeal to everyone who uses the console – and not just girls.

But Ballmer, it seems, has a slightly different view.

Not a games console

The Microsoft CEO also insisted that the Xbox 360 was not a gaming console, insisting that it in fact a 'family entertainment centre'.

Ballmer said that the massively successful Xbox was not just for gamers, pointing to the 8 million Kinect motion and voice controllers that the company has sold.

"It's the only system where you are the controller. Your voice, your gestures, your body."