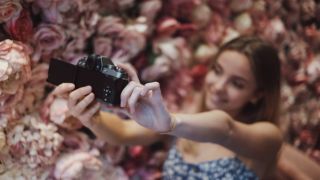 Most people touch up their selfies to remove pimples or ruddy patches without a second thought. Facebook wants you to have the same attitude about removing pesky eyelids from photos, too.

Using a machine learning technique called 'generative adversarial network,' or GAN, Facebook researchers taught an AI to observe a picture in which you blinked, compare it to an unblinking photo of you, and then use “in-painting” to substitute your closed eyelids for open eyes.

Facebook researchers Brian Dolhansky and Cristian Canton Ferrer released a paper Monday that detailed the process. Eventually, Facebook could add GAN as a feature to its Facebook or Instagram apps, though the paper does not suggest this is an option.

Dolhansky and Ferrer taught their AI to match features like iris color, skin tone, eye contours and lighting. They then gave photos to participants in their study and asked them to pick which eyes were the originals. 54% of the time, they either picked the in-painted eyes or couldn’t tell the difference.

Dolhansky and Ferrer did admit that they had trouble generating eyes from some original photos, especially those whose subjects wore glasses or whose hair covered or overshadowed their eyes. They’re confident they can solve the issue with further tests.

Still, with further tweaking, this AI could make it possible to salvage those group photos where one person blinked or everyone squinted in the bright sun.

Adobe is working on an app that will take your selfies and automatically Photoshop them. It’s AI will intelligently study faces and use a telephoto lens to downplay certain features on your face.

Beyond this photo-based plastic surgery, Adobe also uses AI to intelligently select and crop out objects in a photo, or to enhance low-res images by using AI to estimate what pixels are missing and then insert them automatically.

Combined with AI tech to simply edit your facial template to look more handsome or beautiful, and we’re about to get an influx of some very flattering, very unrealistic dating profile pics.