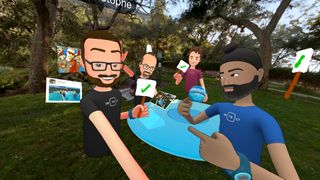 Facebook’s goal has always been to bring you closer to your friends, whether that’s through products like Messenger or simply by your ever-updating news feed. Now, Facebook is taking that goal of connection one step further by introducing Facebook Spaces to the Oculus Rift Store.

Facebook Spaces was a product CEO Mark Zuckerberg unveiled at Oculus Connect 3 earlier this year; however, it wasn’t until today’s F8 conference that we got an extended look at Facebook’s “first social VR product."

The idea behind the software is to bring you – well, a digital avatar version of you – into virtual reality where you can spend time with friends and family in virtual chat rooms. These chat rooms can be altered in several unique ways like immersing you in a 360-degree video or engulfing you in a different environment like the outer reaches of earth’s atmosphere.

But before you can start virtual reality video conferencing, you’re going to need a digital version of you, or as Facebook keeps referring to them as, an avatar.

Here's a video that should help you visualize how it works:

To create an avatar, Facebook pulls a picture of you from your profile and does its best to map the 2D image to a cartoonish 3D figure. From there, you can change your eye color, hairstyle, facial features and more to help people recognize you and hopefully make VR feel more like hanging out in person.

Avatars can not only converse with each other, but avatars can also video chat with friends and family members who may not have an Oculus Rift via Facebook Messenger. Call a friend who isn’t in VR, and they can answer on their phone to instantly open a window into your virtual world.

While the latter scenario is probably the more practical one given the Oculus Rift’s relatively slow adoption rate, gathering in virtual reality will allow for more interesting interactions. To that point, Facebook allows you to use a virtual marker to create 3D shapes that you can move in VR – a neat idea in lieu of allowing you to import virtual objects from a library of assets.

The technology is only available on Oculus Rift and Oculus Touch, and can be found for free starting today in the early access section in Oculus Store.