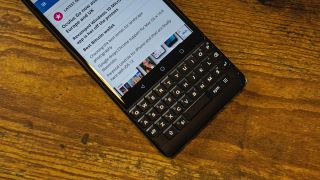 BlackBerry may no longer be the big name in the smartphone industry it once was but it continues to make smartphones. However, a recent comment from a company executive suggests it won’t be embracing 5G as quickly as some other companies.

The next-gen internet technology is now included on a variety of top-end phones, but a TCL executive - the company behind current BlackBerry handsets - has said the company has no plans to include 5G on a BlackBerry product, according to PocketLint.

General Manager of Marketing at TCL, Stefan Streit, told an audience “It's not an entertainment device and you can already get your email really fast. We can have a lot of fun with 5G and where to apply it - maybe in an 8K TV or a fridge…just not a BlackBerry.”

That may seem like an odd choice considering how BlackBerry users are often business-focused and may benefit from the speed, but TCL is mostly now focusing on mid-range handsets and below, while 5G remains a flagship feature, so this isn't totally surprising.

That said, TCL isn’t against 5G technology on phones, confirming it plans to make affordable devices with the technology included in the next year. It’s expected we’ll see a 5G Alcatel phone - a brand that is also managed by TCL - in 2020. So it's really just BlackBerry that will have to do without for now.