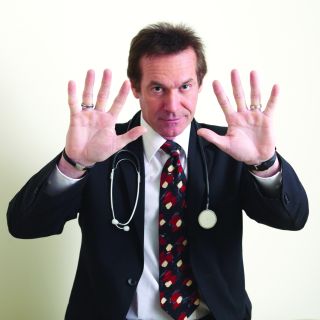 A new study claims to show that our workplaces, and particularly our computer keyboards, are havens of bacteria and potentially fatal viruses such as MRSA, E-Coli and Salmonella.

Dr.Hilary Jones – he of TV fame, pictured here – is helping to promote awareness of the problem as part of the Computer Cleaning Week initiative and claims that we should all be sure to wash out hands AT LEAST ten times daily.

"Cleaning company Durable UK commissioned the survey, which showed up some pretty interesting statistics in areas that had not really been looked at before," Dr. Jones told TechRadar, explaining how he came to be involved in the project.

"Millions of us are increasingly hotdesking at work," he added, "so computer cleaning week is all about raising awareness of the levels of bacteria on computers in the workplace and to get people changing their current hygiene practises."

Perhaps most tellingly, Jones indicates that the survey shows that, while 70 per cent of offices in the study used cleaning companies, only 3 per cent of those were using cleaning products that effectively cleaned employees' keyboards.

Clearly, the survey has to be understood in the context that it has been commissioned by a computer cleaning brand, but if the results that Dr. Jones is very keen to promote are anywhere near the truth then it should lead all of us to be slightly more vigilant in keeping our work computers just that little bit cleaner in future…

Interestingly, the study found that while women were more aware of viruses such as E-coli, MRSA and Salmonella, a higher proportion of female full time workers switch on their computers before washing their hands in a morning – with 55 per cent of female respondents claiming they power up before cleaning up, compared to 42 per cent of men.

"Women are much more conscious about traditional areas of dirtiness – the kitchen, the bathroom and so on – but if they could see the dirt that comes out of the average keyboard they would be horrified," adds Dr. Jones.

The study also claims that 41 per cent of those surveyed consider people to be obsessive compulsive if they take extreme precautions to ensure work surfaces are clean .

"Instead of considering a heightened awareness of workplace cleanliness as an obsessive compulsive thing, we need to understand that we are doing nowhere near enough right now," says Dr.Jones.

"I'm not suggesting we should all be like Howard Hughes and wash our hands until they bleed! But hygiene standards have fallen in recent years and we need to address the problem. This is what computer cleaning week is all about."