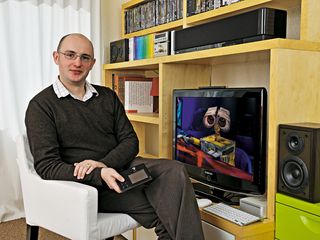 No, for our money you need a Mac mini. It's a proper little Mac, so it's ready to be expanded, added to and turbo-boosted to do everything you need it to.

The Apple TV, on the other hand, is pretty much a closed box and you can't do anything with your films, television shows and music apart from play them back.

Oh sure, it has an HDMI port that makes it easy to hook it up to your modern television, but that doesn't, in our book, make up for the pain of being pushed towards buying your content through the iTunes Store.

Worst of all, it doesn't do the one thing its name suggests it should; you can't use it to watch regular television. Yes, you can buy TV shows from the iTunes Store to play back, but you can't simply switch it on to watch the news or to activate the electronic nanny that is CBeebies.

MAC MINI: The Mac mini is a much more flexible choice than Apple TV

Admittedly, we did give the current models a bit of a kicking in our review, but that was just because they're quite expensive for what you get; they're capable little machines, and we think buying an Apple TV is a false economy.

So, let's get started. First, you'll need a Mac mini. Don't be tempted to buy a second-hand G4 model; though the processor will be perfectly capable of playing back standard-definition video, the PowerPC models lacked the unobtrusive infrared receiver tucked in at the corner of the optical drive slit.

While it's possible to add an after-market IR receiver, we think it's not worth the hassle; go for a Mac mini powered by Intel. The original 1.5GHz Core Solo model will struggle even with 720p HD video, but either of the current models will handle standard definition and high definition just fine. There are some detailed recommended system requirements for H.264-encoded movies here.

Next, you'll need a screen, and a way to connect the two. In theory, you can connect a Mac mini up even to a non-HD television, either over Composite or S-Video connections – you'd need the £15 Apple DVI to Video Adapter for this – but you'd find it difficult to make out the text of the Mac OS X interface.

By all means start with the Mac mini hooked up to your old TV; it'll be fine for watching video, and you'll be able to connect it to a better HD model when you upgrade, letting you stagger your outlay.

Some modern flatscreens have a VGA – more technically called D-Sub (DE15) – port, just like a monitor, but that's an analogue connection, subject to degradation and interference. It's much better to opt for a digital connection.

The neatest solution, given the Mac mini's DVI port, would be to find a TV that has DVI-in, but few do. Happily, almost all decent HDTVs will have at least one HDMI port. HDMI carries audio as well as video signals, making it a handy connection standard for AV equipment.

But the good news is that the video part of the specification is broadly the same thing as DVI, so you can simply buy a DVI to HDMI cable; XtremeMac makes a perfectly decent one, available for less than £13 on Amazon. The Mac mini will auto-sense the native resolution of the TV.

On the very latest Mac minis, the full sized DVI port is swapped for two separate ports: a Mini-DVI connection, which you can adapt to full-sized DVI with a £15 adaptor, and a Mini DisplayPort that is, at the moment, a little useless.

Although Apple has licensed the Mini DisplayPort connection – and it'll be part of the upcoming DisplayPort 1.2 specification – it's poorly supported by the industry at the moment. One Mini DisplayPort to HDMI adaptor exists, and the only reputable monitor that we know of that uses it natively is Apple's LED Cinema Display.

The good news, though, is that with the dual-port Mac minis, you could hook up two displays at once, perhaps using a smaller one as a digital photo frame or RSS headlines display. Next you have to consider audio.

Like the rest of Apple's line, the Mac mini's 3.5mm mini-jack audio port has a little trick up its sleeve. While it's quite happy to output regular analogue audio – ready to be piped into a stereo system's aux input or even a TV if it has one – it doubles as an optical output as well.

Optical audio will keep the digital signal pure right up until the very last minute. But, even more importantly, if you're setting up a media centre, the optical out will enable you to play full 5.1 surround sound if you have a compatible amp or speaker system such as Yamaha's YSP-30D sound projector (shown above the screen in the photo) or Logitech's Z-5500 Digital system. It's not a full-sized TOSLINK connection on the Mac mini, though, so you'll need a mini adaptor.

At least, that's the theory. In practice, it's much less clear-cut, and frankly we're hoping that Snow Leopard, the next version of the Mac OS, makes it all much simpler. At the moment, the best way to ensure you receive 5.1 surround is to either buy content from the iTunes Store or, even more reliably, play a DVD using DVD Player.

However, be warned, iTunes and Front Row seem to have a problem, especially when it comes to ripped DVDs. There are plenty of proposed solutions offered online, but there doesn't seem to be any one answer that works for everyone. Try searching for 'mac 5.1 surround optical' and giving some of the techniques a go.