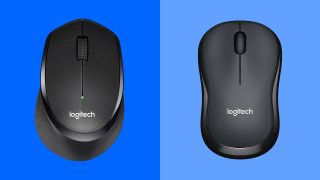 One of the most annoying things about working in the office has to be the constant clicking of mice, and now Logitech has decided to tackle this particular irritation with its first ever silenced mice.

The new Logitech M330 Silent Plus and M220 Silent Mouse are designed to be whisper-quiet even when subject to the most rage-induced double-clicking. What's more, this pair of wireless mice achieve that feat without sacrificing the tactile experience users expect – far from feeling mushy, their buttons still offer the 'click' feel without the noise.

Logitech claims the right-hand favoring M330 features a 24-month battery life, while users should be able to squeeze up to 18 months of use out of the ambidextrous M220.

Logitech has also announced the M720 Triathlon mouse – it doesn't run, swim or bike, but it can connect to three different computers at the same time, with its Unifying Receiver or Bluetooth Smart wireless technology able to quickly swap between devices at the touch of a button.

The M720 can work with a variety of different operating systems, including Windows, MacOS, Chrome OS, Android and Linux.

As it's designed for heavy usage, Logitech has made this mouse durable enough to see you through 10 million clicks, and scrolling through just as many webpages.