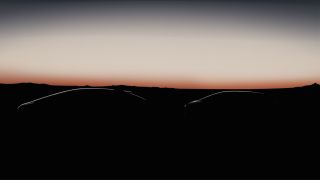 Faraday Future - it's not a household name yet, but come early January, it may be well on its way.

That's because the mysterious EV maker, which has yet to show a car beyond the rendering board, will unveil a concept vehicle at CES 2016. The car is "a new concept inspired by [Faraday Future's] design and engineering vision for the future of mobility."

A dedicated CES page on the company's website beckons visitors to "glimpse into the future" at the show, and a ticker is counting down the days, hours, minutes and seconds until the big reveal.

The sporty silhouette of the presumed vehicle slices through the background, and we're teased that, "The future of mobility is closer than you think."

The Gabbo of electric cars

Faraday Future has maintained a thick coat of mystery around its doings, and even has some speculating it's a front for the Apple Car. What we do know about the young firm is that it plans to make all-electric vehicles that "will offer smart and seamless connectivity to the outside world." The company focuses as much on technology as it does on making cars, and also plans to make headway in autonomous driving.

An intelligent, presumably luxury electric vehicle certainly has the markings of a Tesla rival, but there's one more wrinkle in Faraday Future's story: it has a number of ex-Tesla execs from every corner of that company on its payroll.

We asked Faraday Future (or FF, as a company representative referred to the company) for more details about its CES plans, but the firm is staying tight-lipped. We'll learn more at a press reveal on Monday, January 4 at 7:30pm PT.

Until then, the mystery remains.