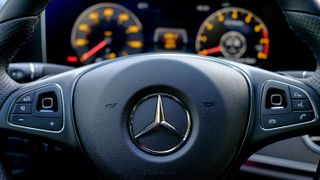 Mercedes’s Drive Pilot system is the automaker’s answer to Tesla’s Auto Pilot system and in many ways, it’s superior. However, an ad for Drive Pilot may have promised more than the system can actually deliver, resulting in Mercedes pulling the ad. Whoops.

The original ad showed a Mercedes E-Class being overtaken by the fully autonomous F015 concept car. The narrator then says, “Is the world truly ready for a vehicle that can drive itself? Ready or not, the future is here.”

The language is a bit too absolute, as Drive Pilot doesn’t actually allow the car to drive itself. Like Tesla’s Auto Pilot, Drive Pilot offers a set of semi-autonomous features like radar cruise control, automatic lane switching and automatic braking. Drivers are still expected to be alert and ready to retake control at any time.

“The new 2017 E class is a technological tour de force and is a significant step towards achieving our vision of an accident-free future. We do not want any potential confusion in the marketplace to detract from the giant step forward in vehicle safety the 2017 E class represents,” wrote Mercedes spokeswoman Donna Boland in an email to Automotive News.

To Mercedes's credit, the pulled ad did include some fine print which read, “Vehicle cannot drive itself, but has automated driving features. The system will remind the driver frequently to keep hands on the steering wheel. Always observe safe driving practices and obey all road traffic regulations.”

However, Mercedes felt the ad could be misinterpreted and ultimately pulled the ad. That’s a smart move, as drivers have already shown too much trust in Tesla’s semi-autonomous driving features, resulting in crashes and even death.