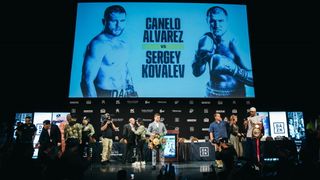 Saul 'Canelo' Alvarez steps into the ring in Las Vegas today looking to become a four-weight world champion against Sergey Kovalev. It's a potentially historic night of boxing in store, and you can watch all the action as it happens, no matter where on Earth you are, with our Canelo vs Kovalev live stream guide.

Canelo Alvarez vs Kovalev - where and when

Ringwalks for the main event are expected to commence at around 10pm local time so that's 1am ET and a 5am BST start for fight fans in the UK.

Known as 'Krusher', Canelo's opponent in Sin City this time out will be 6ft tall Russian champ Sergey Kovalev. Best known for his trademark quick combos, Kovalev retained his belt in August following a stoppage win over Britain's Anthony Yarde , bringing his record to 29 knockouts in 34 victories.

Canelo's mastery of boxing has seen him notch up a fearsome pro record a fearsome 51-1-2, but can he make the leap up two weight divisions and score a victory over an experienced performer at this level?

Read on to find out how to live stream Canelo vs Kovalev fight from absolutely anywhere. Or, if you're in North America, you can head straight to learn about the DAZN coverage of the big fight.

Live stream the Canelo vs Kovalev fight from outside your country

In the US, UK or Canada? Then scroll just a little further down this page and we'll tell you who's broadcasting the boxing from where you are.

They're are also really handy if you're concerned about streaming safely on the web, thanks to the encryption they use to hide your details. And the best won't log your personal information, either. We've tested hundreds of examples and can so can recommend the best VPN services currently available:

ExpressVPN (with a 30 day money back guarantee) is the #1 rated best VPN in the world right now. It's fast, secure, easy to use and you can watch on many devices at once including Smart TVs, Fire TV Stick, PC, Mac, iPhone, Android phone, iPads, tablets etc. Check out Express VPN and get 49% off and 3 months FREE with an annual plan.

How to watch Canelo Alvarez vs Sergey Kovalev: US live stream

Streaming service DAZN once again has the rights to some sought after boxing action and will be the exclusive broadcaster for Alvarez vs Kovalev in the US. This time the main fight should start at 10pm PT and 1am ET.

How to get a Canelo vs Kovalev live stream in Canada

DAZN is the channel holding the cards for Canelo vs Kovalev in Canada, too. But unlike South of the border, Canadians are also offered the one month free trial. Subscriptions are $20 per month or $150 annually at present.

How to stream Canelo vs Kovalev live in the UK

The great news if you're a Sky Sports customer is that you can watch all the action from Las Vegas without having to worry about pay-per-view.

UK viewers can watch the action from 1am GMT on  Sky Sports Action.

If you're not a Sky subscriber, you can watch the fight by purchasing a one-off Sky Sports pass with NOW TV, costing £9.99 per day, £14.99 a week, or £33.99 a month depending on how much Sky Sports you wish to take in outside of Sunday morning's boxing.

How to watch the Alvarez vs Kovalev fight: Australia stream

For fight action Down Under the go-to place is Main Event which will be showing what you want. Head over to the Main Event PPV to learn more or use the VPN option - it will cost you $49.95 with coverage starting at 2.30pm AEDT on the Sunday with plenty of replays to keep you going afterwards.