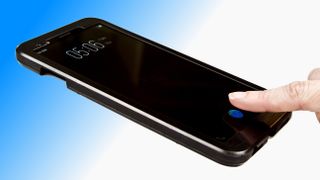 As bezels on smartphones have gotten thinner, their designers are faced with a challenge that becomes more difficult with each passing model released: how do you make your phone stand out amongst the rest?

Hot off of the news that Synaptics is rolling out its embedded fingerprint sensors that work through an OLED display, the mountain to scale becomes even steeper. Without bezels or a visible fingerprint biometrics on the phone’s front or back, there’s increasingly little to work with when it comes to crafting a phone’s identity.

Sure, you might be thinking, the Samsung Galaxy S8, Essential Phone, iPhone X and Google Pixel 2 XL look fairly unique. And while I agree, I also think part of that comes from these phones being the pioneers of trimming bezels and maximizing screen size.

But as I’m sure you’re aware, this aesthetic has since been adopted far and wide in the world of smartphone manufacturing, from the flagship price point down to the startlingly affordable Honor 7X and LG Q6. And to be honest, it’s getting a little dull. Dull to the point that I actually gravitate more toward a phone like the somewhat blocky ZTE Axon M or bezel-packed Google Pixel 2 that boldly (or even ignorantly) clash against the tide of popular smartphone design.

The honeymoon effect of design is getting shorter

When the first smartphones with minimal bezels hit the market, the effect seemed revolutionary, an example of engineering mastery that’s was reserved only for the most elite of devices. But it rather quickly trickled down the price chain. The list of smartphones that employ the look is now seemingly endless, with new ones surfacing all the time.

I’m not speaking for all, but the sheer saturation caused the awe of slim bezels to fizzle into just becoming what we expect to see with each and every smartphone. Not just that, but it also made it much tougher to stand out from the competition – to the big benefit of more affordable smartphones.

Will embedded fingerprint sensors see a similar fate? Probably not. At least, not so quickly – and that’s a good thing.

Synaptics’ new built-in fingerprint sensor is said to work twice as fast as 3D facial recognition, which doesn’t name, but likely includes the iPhone X’s tough-to-fool Face ID, as well as the Samsung Galaxy Note 8’s more pared-back version of face biometrics. Smartphones with high-quality facial recognition cost a lot of money as is and it’s not a feature that’s made its way into affordable phones, unless you count the $449 OnePlus 5T as meeting the criteria.

It checks out that we’ll probably be seeing embedded fingerprint sensors in only the most premium of smartphones set to release in 2018. Synaptics itself strongly hinted that it has partnered with Samsung for the new Galaxy S9 to bring forth the first mainstream device to have the anticipated feature.

But that’s not to say the innovation won’t eventually have a similar impact. Phone makers targeting each and every budget will leap to be the first to offer the feature, and as physical hardware features disappear from the blueprint, what’s left for designers to make their mark on?

This is something that’s been on mind since 2017 saw each of the major phone manufacturers release similar-looking devices. The LG V30, Samsung Galaxy S8, iPhone X, Google Pixel 2 XL, Huawei Mate 10 Pro all blend together in a crowd. The big question is “where do we go from here?”

Whoever first achieves housing an embedded sensor will stand above the rest and for some time, seem wickedly original. But without bezels and a visible fingerprint sensor, the inevitable flood of devices that follow the leader will quickly dilute the effect.