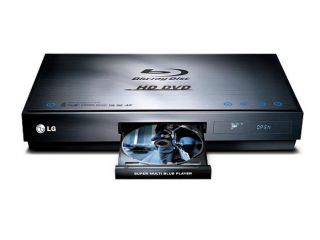 Samsung is to launch a dual-format HD TV player to challenge LG's BH100.

As has been expected for some time, Samsung today announced that it will join LG Electronics in releasing a dual-format high-definition video player that supports both Blu-ray and HD DVD.

In an official news release from Korea this morning, Samsung said that the Duo HD BD-UP5000 will be available, initially in the US, before the end of 2007 and that it "will fully support both HD DVD and Blu-ray Disc formats and their interactive technologies, HDi and BD-Java."

The support for interactive elements of the two HD TV discs means that - unlike LG's BH100 player - the Duo HD allows users to take advantage of picture-in-picture, more flexible on-screen menus and other adornments that HD players offer over DVD.

So far, consumers have generally not taken to either of the competing formats, fearing that backing the ultimate loser in the format war will leave them with obsolete hardware. The dual-format players from LG and Samsung attempt to address that concern by allowing people to hedge their bets.

Dongsoo Jun, a Samsung executive, emphasised this 'altruistic' approach, saying: "We recognize that both HD DVD and BD formats have merits. As such, we have decided to market a dual format player ... Our main concern is not technology but consumer choice."

Although pricing has yet to be announced, consumers are likely to have to pay heavily to exercise that choice. LG's less-capable BH100 currently costs around $1,000 (£506).