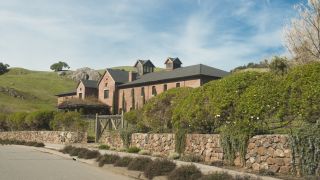 This behind-the-scenes look at Skywalker Sound is part of our official Star Wars Week coverage. Join us as we tour the famous sound studio that brought hundreds of your favorite film, TV and video game scores to life!

Skywalker Sound. Maybe you haven't heard the name before, but you've definitely heard it. Or at least its product, anyway.

In the last decade Skywalker has mixed and made sound for hundreds of projects, everything from Pixar's adorable animations to blockbuster action films like The Dark Knight.

It's pretty good at it, too. Skywalker has won 18 Academy Awards and a handful of Golden Reels - the audio industry's award for sound engineering - in a little over 25 years of operation.

The 40-or-so team members at Skywalker Sound work on a not-so-modest ranch in Nicasio, California - about 45 minutes north of San Francisco. The ranch, appropriately, is called Skywalker Ranch and is owned by none other than George Lucas.

Getting to the ranch is a bit of a trek, and security is tight - guards greet you on your way in and out of the complex. But once you're past the collapsible iron bridge you'll find anything you could ever need, sound mixing or otherwise.

Wandering around the property I saw cattle, a stable equipped for horseback riding, rows upon rows of crops and a vineyard. Inside the Tech Building was a red-brick labyrinth of million-dollar recording studios, original 1940s movie posters and a mostly organic buffet.

I was there to watch video game icon Tommy Tallarico and electronic dance music star BT work on their album Electronic Opus.

In the past, we've shown what great audio looks like, but not the process of how it's made. This feature will change that.

Skywalker Ranch is located in scenic Marin County, a short 45 minute drive away from both the city of San Francisco and Sonoma, California's wine epicenter.

Not pictured is the lavish guest house, herd of cows or Lake Ewok.

The recording stage. This is where the magic starts.

The wood blocks you see in the back have random inlaid patterns that dampen sound.

Even though the name carries a lot of clout in the industry, one of the engineers told me renting space at Skywalker isn't more expensive than a similar space in say, LA or New York.

Behind the recording stage is a booth equipped with a mixing board.

"How much does it cost?" I asked of the board's price.

"It's a few years old now, but brand-new it cost $800,000. But that's before installation," one of the sound engineers at the Ranch told me.

"After everything is said and done it costs around $1 million."

There are 16 of these sound boards located in the main building of Skywalker Sound, with another handful located in other buildings on the property. Primarily, the main house is reserved for big name game developers like Naughty Dog, the team behind the Uncharted series, or movie production studios like Pixar and Paramount.

While I was there sound editing for Inside Out was happening a few rooms away while in another studio artists were plowing through old Star Wars recordings to pick out R2-D2 samples.

On any given day you might see or, more explicitly, hear a dozen of the biggest films of the year being recorded at Skywalker Sound. Here's a list of all the films the firm has ever worked on in-house.

This is the sound board up close. The tape helps sound artists keep track of which instruments are assigned to which channels.

Before mixing down, Tallarico and BT had about 200 channels of raw audio to listen through.

Like-sounding instruments were then grouped together and mixed into the single category seen on these tapes. Levels can then be individually altered to create less or more of one set of instruments.

Although most aspects of the film industry have transitioned entirely into a digital medium, audio engineers at Skywalker still use analog equipment on some projects.

According to the Skywalker Sound website, it has provided sound services for more than half of the top twenty-five highest grossing films of all time.

This article was first published in February 2015