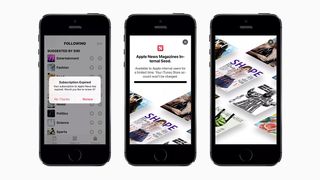 Last year, we heard about Apple's plans to become the 'Netflix of magazines' following its acquisition of Texture, a paid subscription app which provides unlimited access to a large range of publications for a nominal monthly fee.

Sources in the know have stated that the Cupertino company was planning on merging the app's functionality into the Apple News service – which is currently free – theoretically providing its users with a one-stop-shop for all things news-related.

According to BuzzFeed, Apple will finally unveil its upgraded news platform, and also introduce new paid options, at event on March 25 that will be focused primarily on its subscription services.

While it's expected that its subscription-news service will be the event's major talking point, it's likely that Apple's upcoming TV streaming service will also be touched upon during the briefing.

The service, which is expected to cost roughly $10 per month (around £7 / AU$14), is said to be very close to release, with a number of screenshots of the platform recently discovered in the latest iOS 12.2 beta.

According to another recent report from the Wall Street Journal, there have been disagreements behind the scenes between the tech giant and news publishers regarding how revenue is divvied up – something which could end up affecting service's final pricing.