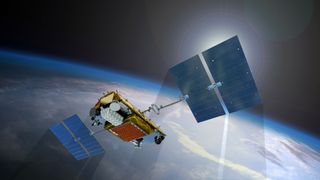 Apple's next big launch may be a literal one as the company seemingly has an interest in internet-beaming satellites.

The tech giant recently hired two executives who led space operations and satellite engineering at Google, according to "people familiar with the matter" speaking with Bloomberg. The ex-Googlers are set to join a new hardware team at Apple, led by Dropcam co-founder Greg Duffy.

Duffy, by the way, is himself a former Alphabet employee thanks to Nest buying Dropcam in 2014. Duffy left to join Apple last year after reportedly clashing with Tony Fadell. Alphabet is the parent company of Nest and Google.

But back to the matter at hand: What exactly does Apple need with top talent in the field of satellites?

Collecting aerial data to improve Apple Maps is one possible explanation for Apple's orbital ambitions, but evidence more strongly suggests the iPhone 7 maker has designs to launch or at least be involved in delivering broadband internet from space.

Apple has apparently discussed such a project with Boeing, potentially becoming an "investor-partner" in a scheme that sends more than 1,000 satellites into low-Earth orbit, Bloomberg notes.

This partnership may not pan out, but even still the two hires suggest Apple has more than a passing interest in space-bound tech. It's far from the first company to turn its attention to the skies with the likely aim of connecting people who don't already have internet access.

Other industry leaders are already working on satellites and other means of delivering internet to remote regions, including Facebook, Google and SpaceX.

Facebook has developed a drone plane and helicopter designed to beam down internet connectivity where it's unavailable, and Google has its Project Loon balloons sailing around the world to connect people in hard-to-reach locales.

Facebook, Google and SpaceX are all working on internet satellites for these purposes as well.

Apple may be playing catch-up, but that's par for the course. The company is already behind in virtual and augmented reality (though recent reports suggest not for long) and car tech (again, it appears to be catching up here, too).

Internet satellites would be a radical new venture for Apple, but not without precedent. And as Facebook, Google and SpaceX jostle for space real estate, Apple would do well to join the fray sooner rather than later.