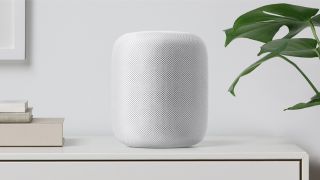 Details about the rumored Apple HomePod 2 have been thin on ground so far, but a recently filed patent by Apple suggests that the second generation smart speaker could support Face ID.

According to MacRumors, the patent describes a "countertop speaker" that could "identify users in the vicinity of the speaker using facial recognition, as well as measure the distance of users [in relation] to the speaker".

So, while Apple hasn't explicitly named the HomePod 2, a Bloomberg report in July 2018 suggested that Apple could be looking to release the HomePod 2 in early 2019, so it would make sense if the patented tech was designed for a second gen smart speaker.

Having Face ID built into the Apple HomePod 2 could provide an additional layer of security for users, as well as allowing for multiple user profiles, with each user identified via facial recognition.

The patent also explained the countertop speaker would be kitted out with "various sensors and cameras that gather hand gestures and other three-dimensional gesture input."

If the countertop speaker mentioned in the patent really is the HomePod 2, it may be possible to control it by waving or clapping for example, with no need to actually touch the device itself.

According to the patent, the smart speaker could have LEDs woven into the fabric to provide "visual feedback for the hand gestures," as well as being configured to "display alphanumeric characters through the fabric that change depending on time of day". So, it sounds like the HomePod 2 could potentially double up as a clock.

MacRumors also identified a rather unusual potential feature of the Apple HomePod 2 in the patent – an "emoji-based avatar that would adapt to a user's mood or actions," perhaps even mirroring your emotions.

Like any patent, it's not guaranteed that any of this technology will ever be rolled out to the public, or even if it applies to the rumored Apple HomePod 2 – and with no release date confirmed,  we are as in the dark as ever (despite the promise of LEDs).