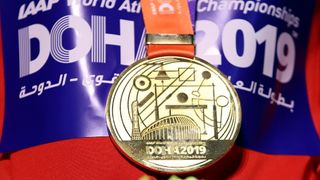 The 2019 World Athletics Championships has been fantastic so far (as long as you're not counting attendance numbers) with medals being handed out left, right and centre. Regardless of where you are on the planet, our guide below for getting a World Athletics Championships live stream will ensure you don’t miss a moment of all the heats and finals.

With 3,500 athletes from 205 countries competing, this year's event is controversially taking place in Doha, Qatar at the impressive Khalifa International Stadium which is handily fitted with air conditioning to deal with the stifling heat.

World Athletics Championships 2019 - where and when

Taking place in Doha, in Qatar, this year's event marks the first time the World Athletics Championships have been held in the Middle East.

Most of the action is being hosted at the 40,000 capacity Khalifa International Stadium, with longer events such as the race-walk and marathon taking place in the city itself.

It all kicked off on Friday, September 27 and lasts for 10 days until Sunday, October 6.

The USA are looking to maintain their impressive record in the medal table as they look to beat their haul of 30 across the 2017 championships, while Great Britain will hope to improve on a sixth-placed finish.

Among the athletes to look out for this time out will be the USA's Christian Coleman has already shaken off recent anti-doping charges to take men's 100 metre gold. Elsewhere, Jamaica's Shelly-Ann Fraser-Pryce took top honours in the Women's blue  event.

But there's plenty more action to come before we get to the traditional closing event - the Men’s 4 x 400m relay on Sunday.

If you want to know where you'll be able to watch the action, we'll tell you exactly where you can catch all the track and field drama online with our 2019 World Athletics Championships live stream guide.

Below we have a full rundown of your watching options in different countries .

The problems start when you try to watch your domestic coverage online while out of the country. Give its a go...you'll quickly find your stream in geo-blocked.

Once installed, you simply open the VPN app, hit 'choose location' and select the appropriate location - it's super easy to do. Choose a server in your home country and watch the World Athletics Championships if you were back there.

How to watch the World Athletics Championships: US live stream

NBC is the official English language broadcaster of the 2019 World Athletics Championship, and will be broadcasting more than 60 hours of competition coverage from Doha, Qatar across NBC, NBCSN, the Olympic Channel.

In addition, NBC Sports Gold will be streaming live coverage of every event over the 10-day meeting.

If you're a cord cutter, you can alternatively watch on another subscription service, like the ones listed below - each of which has a free trial.

Logging in to a US broadcast from overseas is also a great option using a VPN following the instructions above. So if you love the commentary and coverage in the UK, for example, you can catch up with that instead.

How to stream the World Athletics Championships live in the UK

The great news for track and field fans is that the World Athletics Championships will be shown for free in the UK, with the BBC providing comprehensive coverage across its platforms.

For old school TV viewers, BBC1, BBC2, BBC4 and the Red Button will all hold live coverage throughout the meeting, but you'll also be able to live stream events (and catch up) via BBC iPlayer on your laptop, smartphones or tablet.

if you're not in the UK but want to catch up with any of the BBC coverage, then you'll need a VPN to relocate your IP to the UK and get around the region restrictions. Just follow those instructions above.

Don't get disheartened if you're away from Canada and want to catch any of the track and field action. Instead, scroll this page upwards and check out how to use a VPN to live stream the free World Athletics Championships coverage from another location.

How to live stream the 2019 World Athletics Championships in Australia

Eurosport is the place to head to for full exclusive live coverage of the 2019 World Athletics Championships.

The channel is available to Foxtel subscribers and also available on mobile devices and laptops via Foxtel Go app (although you'll need a VPN if you're taking that abroad).

2019 World Athletics Championships - when are the finals?

ALL TIMES IN BST