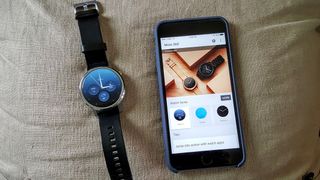 Pairing up an Android Wear watch with an iOS device such as an iPhone may sound like an odd mix, but it's actually a pretty good partnership, as long as you know what the strengths and limitations are. You'll need one of the newer Android Wear devices to make this happen, such as the Huawei Watch, LG Watch Urbane, or second-generation Moto 360. (Some users have had success in pairing an iPhone up with an older device, but your results may vary.)

What Android Wear does

If you've used with or played with an Apple Watch, you'll need to recalibrate your expectations for Android Wear. Google's wearable platform, especially when paired with an iPhone, is primarily a notification device, providing you with a stream of Google Now-style cards with updates from Gmail, Google Calendar, Keep and other services in the company's portfolio.

But through the power of Bluetooth you'll also get any of your iPhone notifications on your wrist. You just won't be able to respond via voice with most apps or interact as deeply as you can compared to those built for Apple Watch. Nor can you push a button to open an app on your phone - a feature of Android Wear when paired with an Android phone.

But by and large, it works well at pinging you with alerts. You can customize a few key settings, like whether to get calendar events cards from the stock Apple Calendar or Google's. You can also get "rich Gmail" cards if you prefer a more pure Gmail experience. Once you get a notification, you can archive the message or speak a reply.

Pairing up an Android Wear watch and iPhone is pretty painless. You just need to first download the Android Wear app from the App Store. Then, be sure that Bluetooth is activated on your iPhone.

Once you initiate a pairing, you'll need to enter the code into the Android Wear app that you see appear on your watch. The app will then ask to access your calendar and enable notifications so you can get a buzz on your wrist. (No, it's not as gentle as the tap an Apple Watch gives you.)

Then, voilà! You're paired and ready to go. Inside the Android Wear app you can pick from different watch faces that come with your specific device. Others have been built by third parties, though not nearly as many as you'd get on Android since developers generally submit their watch faces to the Google Play Store.

Much of the power found in Android Wear comes through voice commands. You can raise the watch at any point and say, "OK Google" and then speak your search query. Once you see a phone icon on the watch, you can press it to view the results inside the Android Wear app on your iPhone.

You'll launch an in-app browser and can then read more about your search term. You're a little limited from what you can do from here, as you're trapped inside the Android Wear app. For example, when searching for a location you aren't able to go from the browser over to Google Maps. However, for quick searches or other minor actions, this feature may be enough.

In all it's a surprisingly good experience. You won't get native apps like you can with Apple Watch, but you'll have far more choice in the type of wearable you go for and have one that may feel like it offers just the right amount of functionality.