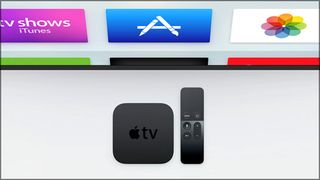 Thinking of getting an Apple TV? Good for you! They run as low as $69/£59/AU$109 and you deserve it. My family and I have enjoyed using ours for years, and if the wife and kids had to choose, they'd probably ditch me before giving up the easy access to HBO, Netflix, and Disney Junior. (I don't take it personally.) Setting up an Apple TV is dead easy, but I've whipped up this quick guide to make sure you get the most out of your little black box. Come meet the new star of your living room! (And for a list of cool Apple TV accessories, click here.)

APPLE TV IS a small, square box that uses an Internet connection to stream movies, music, and more to your TV. Content is accessed through a variety of channels that populate the Apple TV home screen like apps. As I said above, the entry-level model retails for $69/£59/AU$109, and can sometimes be found cheaper depending on the deals Apple has going. Refurbished units pop up at Apple.com at a discount, and past specials have paired new units with iTunes cards. There have been a few revisions to the hardware over the years, so if you buy used, be sure to get a third-generation unit (which first hit the market on March 7, 2012), otherwise it won't be capable of displaying video at full 1080p HD.

The high-end version, which you'll sometimes see referred to as the fourth-generation Apple TV, can be had for $149/£129/AU$269 (32GB) or $199/£169/AU$349 (64GB). If you can spare the extra cash, the additional features are well worth it. You can access a growing catalog of games, video-streaming services, and other kinds of apps via the Apple TV App Store, and you get a nicer remote with touch-sensitive controls and a microphone for Siri voice commands. You can tell your Apple TV to do a wide variety of things, from "Open HBO Go" to "Find Walking Dead season four on Netflix" to "repeat what she just said." (Go here for a full list of features.)

TO MAKE APPLE TV WORK, you need to connect it to the Internet. A wired Ethernet connection is generally more stable, but Wi-Fi works just fine as long as the Apple TV is getting a strong signal from your wireless router (you can check signal strength on the Apple TV at Settings > General > About). To connect the unit to your TV, you need a standard HDMI cable (sold separately for as cheap as $3/£4/AU$4, depending on the length). If you want to hook up surround sound, you can use an Optical audio cable.

APPLE TV COMES WITH a remote that's super simple to use, but is kind of flimsy to hold — it's too thin and tiny to get a good grip on. It's not a major issue, but you might be better off using the free Remote app that lets you control Apple TV with your iPhone, iPod touch, or iPad. This is by far the best option for typing the names of movies or TV shows into, say, a Netflix search field, since it takes forever to seek out letters with the arrow keys or touch pad of a regular remote. The remote that comes with the fourth-generation Apple TV (pictured above) has extra functions, such as a microphone for Siri commands, a clickable touch pad, and motion-control sensors. Apple TV also comes with a power cord, and that's it — as I said before, you'll need to buy an HDMI cable separately.

VIDEO-STREAMING APPS cover a wide variety of content, everything from YouTube videos to live sports to HBO, and new ones are added regularly. The better ones usually require a paid subscription for access to anything more than a few sample shows, either with the content provider (such as Netflix and Hulu Plus) or a cable/dish company (such as Comcast or Direct TV). For a look at some of the top-line video apps, check Apple's official page.

APPLE TV CAN ALSO stream stuff from your Mac or iOS device — it can even mirror exactly what's on your other screen. (Some apps don't support this feature, though.) You can buy music, movies, and TV shows through various channels, and stream any iTunes content you've bought on other devices — anything purchased using the same Apple ID. Apple Music subscriptions and iTunes Radio are also supported, and with My Photo Stream, you can pull your latest photos and videos down from the cloud to view on your TV. Apple TV even works with Apple's Family Sharing, so you can pull content associated with multiple Apple IDs. With so much functionality and interoperability with the rest of Apple's ecosystem, adding an Apple TV really is a no-brainer.