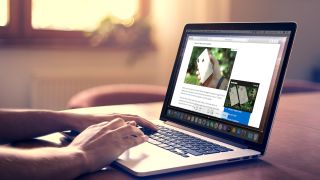 At first, it may not seem entirely obvious how to screen record on a Mac, but the process is actually very simple. With just a few taps you’ll be recording whatever it is you need on your Mac’s screen.

In this tutorial we’ll cover two ways you can easily screen record on a Mac: using a built-in shortcut and using QuickTime Player.

Both are quick and simple, so you’ll be up and running in no time. Note though that the built-in shortcut is only available for macOS Mojave or later – if you don’t have Mojave, skip ahead to step 7 and the QuickTime Player section.

From macOS Mojave onwards, there’s a built-in shortcut on a Mac that lets you start recording your screen.

Press Shift + Cmd + 5 and you’ll get an on-screen menu giving you various recording options. These let you choose whether you record the entire screen, just a portion of the screen, or capture a still image of the whole screen, a window or a section of the screen.

You’ll also get a dotted box indicating what will be captured if you just want an image, and you can shrink or expand this as needed. Press Esc to cancel making a recording before it starts.

Once you’ve pressed Shift + Cmd + 5, press the fourth button from the right – it looks like the outline of a window with a circle in the bottom-right corner. This tells your Mac you want to record the entire screen.

Once you’ve clicked this button, your pointer will change to a camera icon. Click the screen you want to record (for example, if you’re using two monitors then you can click the main one to just record that).

An icon will appear in the menu bar indicating recording is in progress; click it to end the recording and automatically save a video to your desktop, or press Ctrl + Cmd + Esc.

3. Record a portion of the screen

If you only need to record a section of the screen (such as what is happening in a single app window), press Shift + Cmd + 5 but this time click the third button from the right – it looks like a dotted box with a circle in the bottom-right corner.

This will create a box that shows what will be recorded. You can click and drag its edges to shrink or expand it.

To move the box, click and drag from within its bounds. Once you’re happy with the selection, click the Record button in the options menu at the bottom of the screen.

4. Save your screen recording

Once you’ve finished recording, a thumbnail of the file will appear in the bottom-right corner of your desktop screen. If you ignore it or swipe it to the right, it’ll disappear.

Shortly after, a saved file of your recording will appear on your desktop.

Once that’s done, you can move or share the file if needed. Apple automatically saves screen recordings as MOV files, so if you want to share the recording make sure whoever you’re sending it to can play that type of file.

If you want to edit your video, click the thumbnail that appears once you’ve finished recording. This opens an editing window with a couple of simple tools. Click the button to the left of ‘Done’ to trim the video, or click the far-right button to share it to other people.

Alternatively, Ctrl + click the thumbnail before it disappears to change where it’s saved, open it in Mail, Messages, QuickTime Player or Photos, show it in Finder or delete it, or edit it. You can also drag the thumbnail over a folder, email or document to add it to that location.

The Shift + Cmd + 5 shortcut gives you some handy options to adjust the screen recording. The first option is where the file is saved. By default, it’s set to the desktop, but you can change it to your documents, Mail, Messages, QuickTime Player or another location that you specify.

You can also give yourself a timer to count down before recording, and record audio using as well as video if you want to do a voiceover.

There are options on whether the thumbnail from step 4 appears, whether your last selection is remembered for future videos, and whether mouse clicks are highlighted.

7. Get QuickTime Player set up

You can also use QuickTime Player to screen record on a Mac. Open the app, then click File > New Screen Recording from the menu bar (you may be prompted to grant it permission in System Preferences).

On macOS Mojave or earlier, you’ll get a small box with a red record button. If you want to adjust the recording’s settings before starting, click the down arrow next to the red button.

Here, you’ll get options to show mouse clicks in your video and use a microphone. If you decide to record audio, you can adjust the input volume using the slider under the red button.

To start recording, press the red button. Click anywhere on the screen to record the whole screen, or click and drag a selection and click Start Recording to only capture that area.

Clicking the black stop button in the menu bar or pressing Ctrl + Cmd + Esc will save your recording.

Note that on macOS Catalina, the process is slightly different. Clicking File > New Screen Recording brings up the same on-screen options that you get by pressing Shift + Cmd + 5 – refer to previous steps in this tutorial for more detail on that.