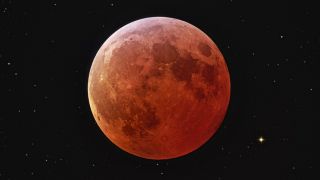 On Wednesday, January 31, observers in western US states, Australia and Asia will see the full moon dip in brightness before it gradually turns pink, copper and a deep orange during a total lunar eclipse.

Surrounded by stars (and, for those in Alaska, possibly also the Northern Lights), totality during a total lunar eclipse is a stunning sight to behold. Here's everything you need to know to see and photograph this week's total lunar eclipse.

What time is the lunar eclipse and where to see it

A total lunar eclipse can only be seen on the night side of Earth, but in many places on January 31, the moon will rise or set during totality.

A decent-sized portion of the US is reasonably well placed to see totality before sunrise. Hawaii and Alaska both get great views, while Washington, Oregon and California will also see the entire event. In fact, all US states on the Pacific side of the Rocky Mountains will get a decent view of the eclipse just before sunrise.

Midwestern states will also get a good glimpse of totality, though everywhere east of the Mississippi will miss out. However, even better places to watch from include Australia, which will see the event just after midnight, and East Asia, where it'll be an evening spectacle.

If you don't live in one of the locations that will see totality – or simply don't want to get out of bed – NASA is streaming the eclipse, letting everyone watch as the spectacle takes place.

What is a lunar eclipse?

A total lunar eclipse can only occur during the night of a full moon, when our satellite is on the opposite side of Earth to the sun. Earth projects a shadow into space at all times, but only occasionally does the moon pass through it. When it does so, Earth blocks the sun's light from reaching the moon.

So, why does it go reddish instead of black? Indirect light from the sun is filtered through Earth's atmosphere, where gas molecules scatter short-wavelength blue light, but not the longer wavelength red light.

Hence the sky looks blue by day, and – because you're looking through a lot of atmosphere when you look to the horizon – a sunset looks reddish. It's the same with a total lunar eclipse; sunlight is filtered by Earth's atmosphere and then refracted and projected onto the moon.

Why is it a called a 'blue blood supermoon'?

The clickbait media is in meltdown for this event, mostly for the wrong reasons. Heard the phrase 'blue blood supermoon' yet? You will. The moon on January 31 is slightly closer to Earth than normal, so it's called a supermoon by some (despite it being barely noticeable).

It's also being called a blue moon because it's the second full moon in the same month (the last one was on January 2). That's not correct, astronomically speaking. A ‘seasonal’ blue moon is actually the third full moon when four occur in one season, which is much rarer than the ‘monthly’ blue moon that the internet obviously prefers.

Lastly, the media now insist on calling lunar eclipses 'blood moons', though during the event the moon takes on a mostly orange color, and not deep red.

The eclipse is a process that takes about five hours in total, though you don't need to be awake for all of it. Let's take Los Angeles as an example (remember to find out the exact times for totality where you are).

There, the event kicks off with a penumbral eclipse at 2:51am PT, but you can stay in bed for that. Instead, get up at 3:48am PT to watch the partial eclipse begin. Get your camera gear ready because the moon will begin to lose its brightness, and start getting reddish on its edge. You'll soon see the weird sight of a crescent moon with a blurry straight line between the bright and dark areas. That's the line of Earth's atmosphere being projected onto the lunar surface.

At 4:51am PT, the last slice of brightness will disappear from the lunar surface, which takes on a reddish color to the naked eye. This is totality, when you should takes lots of photos, and where the colors will change. Totality in Los Angeles lasts until 6:07am PT, when brightness will appear on the opposite side of the moon, ending totality. That triggers another partial eclipse, but by now the moon will be sinking closer to the horizon.

Compared to a total solar eclipse, it’s a pretty lazy event – the central event of totality is a window of 77 minutes.

How to photograph the eclipse with a DSLR

So, how do you do it? The good news is that you don't need any filters, as you do with a total solar eclipse. The bad news is that since the moon is so small, you're going to need some magnification. That means either using a telephoto lens on a DSLR camera, or putting a DSLR camera on a telescope so the moon fills much of the frame.

Unless you want to do layered montages using multiple exposures using a wide-angle lens, find yourself a telephoto lens (minimum 300mm) and either a standard tripod or a travel tripod. Use a remote shutter to minimize camera shake, and always shoot in the RAW format for easier editing.

A total lunar eclipse isn't easy to capture, but you do have a lot of time to play with various settings. As well as a wide range of colors, lunar eclipses bring a lot of changes in brightness. Also bear in mind that when zoomed-in, the moon is a very fast-moving target (blame our rotating planet).

Consequently, you will always need a high shutter speed. So, as the moon dims in brightness, increase the ISO (try ISO 200 during the partial phase, and ISO 800 during totality) and open the aperture (start about f/11 and experiment). However, it's not just about getting a sharp image, because during the partial eclipse, the moon will be half-bright and half-dim, so you have to make a choice about which side of the moon to expose for. The answer, of course, is to try both, many times over.

Take a spare battery and lots of SD cards, and prepare for a huge post-processing session.

How to photograph the eclipse using a telescope

Those with the option to attach a DSLR camera to a telescope will get the best close-ups. A telescope with a focal length of over 1,000mm but under 2,000mm will capture the whole of the moon in detail. If it's installed onto an equatorial mount that automatically tracks the moon, you will also be able to adjust the shutter speed.

How to photograph the eclipse using a smartphone

There is no way you can take a decent photograph of an eclipsed moon with just a smartphone. However, if you do get a chance to watch the eclipse through a telescope, you could indulge in a little digiscoping.

With the flash deactivated, put your phone's camera over the telescope's eyepiece and zoom-in slightly to avoid vignetting. After some adjusting, you should get a decent image of the moon in relative close-up. Simply focus on the moon and lock the focus and exposure (on the iPhone that’s just a long press on the screen), and snap away.

And if the weather doesn't play ball on January 31? Well, Europe, Africa and Asia will see a total lunar eclipse on July 27, 2018, while those in Northern Europe and the Americas (including the entire USA) only have to wait until January 20, 2019.

Jamie Carter is an astronomy journalist and editor of WhenIsTheNextEclipse.com .