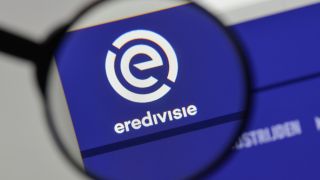 Dutch football is enjoying something of a renaissance, and this year's Eredivisie hasn't disappointed so far. So, what better time to find out how to watch all the action from one of Europe's most entertaining leagues from wherever you are in the world? You've found your way to our all-knowing guide to getting a Eredivisie live stream.

Last year's champions Ajax  may have lost Frenkie de Jong and Matthijs de Ligt to Barcelona and Juventus, but despite Europe's biggest teams eyeing up the rest of their young talent, Erik ten Hag's side remains otherwise intact and they have unsurprisingly been among the leading pack.

However, having opened up a sizeable lead at the top they were reeled back in, not by usual rivals Feyenoord or PSV, but by the unfancied AZ Alkmaar who are having a stormer of a season under new boss Arne Slot.

There's also an intriguing sub-plot at the bottom of the table, with former Newcastle and West Ham manager Alan Pardew helicoptered in to help save struggling Den Haag from relegation.

It promises to be a thrilling tail end to the season, and one you'll be able to watch all the live action, no matter where you are in the world, by following our Eredivisie live stream guide below.

Watch an Eredivisie live stream football from outside your country

If you're abroad but just can't bear to miss out on catching Eredivisie League live stream coverage from your home country, you'll inevitably find it geo-blocked when you try to stream online. But don't panic. Using a VPN, you can tune into those fixtures no matter where you are in the world without resorting to some dodgy feed on Reddit. And best of all, it's really easy to do:

Scroll down to find out your football viewing options in some of the major Eredivisie League watching countries around the world. But even if you're away from your home coverage, you can always use a VPN to dial back into your country that does have a stream. A VPN is perfect for this as it allows you to change your IP address so you appear to be in a completely different location. We've tested hundreds of VPNs and can recommend these as the best VPN services currently available:

1. Express VPN (comes with a 30 day money back guarantee)
This is the #1 rated best VPN in the world right now. You can watch on many devices at once including Smart TVs, Fire TV Stick, PC, Mac, iPhone, Android phone, iPads, tablets etc. Check out Express VPN and get 3 months free on an annual plan

Virtual Private Networks have some pretty nifty other uses in addition to letting you to watch sport and TV from other locales. For starters, their encrypted nature means that the information you exchange on a daily basis online is kept safely away from prying eyes. And they also help to get around website blocking in certain offices, schools and even countries.

How to stream Eredivisie live in the UK

Lesser-known network Premier Sports has beaten all the other traditional UK broadcasters for the rights to show live action from the Dutch league this season. You can subscribe for £9.99 per month for SD and HD coverage if you're on Sky or Virgin Media, or £99 per year if you like the sound of its rugby union, rugby league and motorsport offerings, too.

Premier Sports also has its own dedicated app which lets you watch all this action on the go. And if you're out of the UK but have subscribed, you can always use a VPN to relocate your IP to a UK location and watch the match as if you were back at home.

How to watch the Eredivisie League: US live stream

ESPN obtained the rights to Eredivisie last year and the network is once again offering its live coverage of matches online via its streaming service ESPN+.

It costs $4.99 per month so pretty darn cheap - which includes access on laptop, desktop, mobile app and TV streamer apps such as Apple TV, Amazon Fire TV, Roku, PS4 and Xbox. And there's no commitment either, you can discontinue the service at any time.

If you're outside the US but still want to watch that ESPN+ coverage, then there's the possibility of using a VPN to access it from abroad.

Somewhat surprisingly, no broadcaster or streaming service has picked up the rights to air Eredivisie League live in Canada. You could try a VPN to digitally relocate yourself to another area of the world that is showing it - just be prepared to fall foul when needing a localised credit card to sign up...

How to live stream the Eredivisie League in Australia

As with Canada, no broadcaster has scooped up live rights to show Eredivisie over in Oz. If you're desperate to get your fix of Dutch footy action, you could give a VPN a spin digitally spoof your location to a part of the world that's lucky enough to be showing live Dutch games. Just be aware the you may run into issues if you use a non-localised credit card when you attempt to sign up.

The ability to live stream all the football to your phone or tablet is undeniably useful - you don't have to miss a single goal, even if you're out of the house. But if you want to stream the Eredivisie from the internet to your TV, then picking up a streaming box might be useful. Check out our guide to the best streaming media players, where the likes of Apple TV, Roku and Amazon Fire are all included.