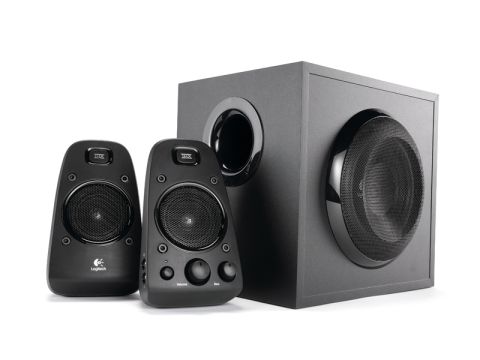 Logitech products appear to fit into two separate categories, especially when it comes to speakers.

We've seen – and heard – £200 5.1 setups that have blown everything else clean out of the water, but on the other hand, you can also pick up a set of stereo speakers for £15 that sound like they should have cost no more than a fiver.

At £120 the Z623 certainly doesn't come cheap, but does it sound like it's worth all that extra money? The answer is a resounding yes.

The sound is deep and rich, and the most 'three-dimensional' we've ever heard from a 2.1 system. Even coming from a laptop's dubious-quality in-built sound card, the sounds of gunfire in our favourite FPS seemed to come from all around us. How soothing.

The bass and treble are perfectly tuned out of the box, but if you want to add more bass there's a dedicated rotary dial on the right-hand speaker. Despite the slightly 'Day of the Tentacle' design of the speakers, they're well built too.

The subwoofer is one of the smaller ones we've seen, but it did just as good a job of bass reproduction as ones the size of a small fridge. The satellites compliment it perfectly, being adequately weighted in terms of both construction and sound.

If there's a slight niggle, it's that Logitech has elected to use the same connection system it uses on its lower-end speakers. The right satellite houses the power, volume and bass controls, and it connects to the sub-woofer via a proprietary VGA-style cable. The left speaker simply connects to the sub with a phono plug.

The system evidently works, and having power control on the desktop saves you having to lean over to a hidden sub to turn them on – and it's exactly the same system you'll find on Logitech's £15 speakers.

They have to be heard to be believed though, and despite our reservations about the THX certification, it actually seems to mean something here. These come highly recommended.