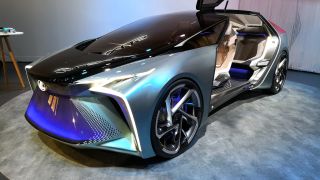 Last week, Toyota and its luxury arm Lexus hosted an event called Kenshiki Forum 2020 to showcase its newest models and potential creations of the future. It was a handy one-stop-shop in terms of getting to see (though sadly not drive) a diverse selection of cutting-edge cars.

'Kenshiki' is Japanese for insight, and we got plenty of that over the course of a day inside the darkened confines of an old industrial location just outside Amsterdam. For example, we got up close to Toyota’s hugely exciting GR Yaris, which has been developed by Toyota Gazoo Racing.

Created on an a dedicated platform, the pocket-rocket features a new 257bhp, 1.6-litre three cylinder turbo engine and a lightweight all-wheel drive system. It’s going to be awesome.

Toyota also announced that it would be introducing a new compact B-segment SUV based on its Global Architecture or GA-B platform. Tech Radar got to see the basis of the platform, which will allow the manufacturer to produce a variety of models with different widths, heights and wheelbase lengths. It’ll be used for production of the new Yaris, but other models will doubtless employ it too given its flexibility.

From sketch to showroom

We also got to see the most head-turning car of the lot, the Lexus LF-30. It's not a production model, but as Ian Cartabiano from the design team explained, this concept isn't just an extravagant exercise in showing off, either.

“It’s the first time I’ve ever seen this car actually moving,” he commented after we watched it roll silently across the stage area in the cavernous warehouse where the event took place.

Cartabiano was clearly excited, and no wonder, because the Lexus LF-30 really fires up the imagination as to where electric vehicles might be in 10 years' time. “I really feel passionate about this car,” said the American designer, who’s currently based at ED2, the Lexus design studio that lies hidden in the hills in the south of France. “Three words define this car from the very start: brave, artistic, futuristic.

"To create this car, we used a new design process internally. Of course, we still do hand sketching, but for this car we used VR sketching, we used 3D polygon modelling and we did a lot of rapid prototype printing, as sketches.” To elaborate this point, he handed around toy car-sized models that emulate the same lines of the full-size concept.

The winds of change

There are many dramatic touches to this car, but one of the highlights has to be the in-wheel motors and the way the tyres and wheels have seemingly become one. “It's very sci-fi,” agrees the designer. “That's the first time that we actually were able to get spokes into the tire sidewall, so it's not fake. It really goes into the tire and the tire treads themselves were designed by Goodyear to guide air into the in-wheel turbines. So they're actually functional.”

Impressive though the wheels are, Cartabiano's favorite part of this car is actually the way the front wing has been sculpted. "As a designer, I must have taken about 800 or 900 photos of this,” he said. “I really love looking down the front shoulder of this car at the surface rotating and moving and going under the wing element where there's an actual opening for air to pass through. I love this shape. I love this form.”

Things are just as wild on the inside, as the door opens up to reveal a space-age interior. “This dramatic door opening is made possible by the carbon fibre structure of the whole car,” said Cartabiano “These doors only weigh 16kg. The driver and each passenger in this car get a unique seating experience. So the driver gets a performance cockpit; the front passenger gets a seating experience inspired by a first class jet cabin. The rear passengers have this active Zen lounge space.”

Staying with the pretty ‘out there’ thinking the designer adds: “The HMI interface was inspired by bringing the universe into this car. So, for example, above the rear passengers, there's something we call the sky gate.

Now the sky gate is an augmented reality navigation system inspired by the way the ancient mariners used to navigate the seas using the stars. It connects the rear passengers to the front passengers with their driving experience. It's a way to share the road ahead.”

The icing on the cake has to be the disc-shaped key for the LF-30. “I actually call this thing the soul of the car,” said Cartabiano. “In the future world of connectivity, this key will hold all your data that you wish to share and also your presets, or how you want it to drive. But, beyond that, it's a beautiful piece of jewellery. The designer who designed this used to design jewellery and perfume bottles for Dior. I really love this piece.”

Slightly less of-the-future but still facing the hurdle of a lack of refuelling infrastructure was Toyota’s new second-generation Mirai.

This hydrogen-powered dream machine is a treat to look at in an uncomplicated way with its simple, clean lines delivering an air of understated elegance. It’s a step-up from the original hydrogen-powered saloon that appeared in 2014 with its 20-inch wheels that carve up into the sides to great effect.

Along with fresh new styling, both inside and out, the Toyota Mirai also boasts an increased range thanks to the way three on-board fuel tanks have been incorporated into the design. Toyota says the increase is up by about 30%.

Meanwhile, the car is also said to be more responsive and handles better thanks to the more hunkered down design and higher body rigidity that comes from using a modular TNGA construction platform developed by Toyota.

The Toyota Mirai is an interesting creation and deserves to have the infrastructure to support it. However, with the UK as an example having just 17 hydrogen outlets at present, we’re not quite there yet.

Another interesting development also unveiled at the show was Toyota’s new Kinto brand, which isn’t so much a unique idea, but it could represent a neat twist on a concept that has been tried by other manufacturers with, it has to be said, mixed results.