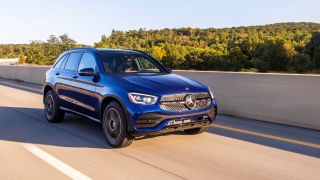 This fantastic sport-utility is loaded with new technology like an augmented video overlay for the navigation system. However, I was most interested in testing out the new voicebot because it connects to some of the car features and doesn’t just tell you the weather.

MBUX is actually something I’ve been wanting to test for quite some time, and a feature I’ve dreamed about in cars ever since I first tested out Apple Siri, Amazon Alexa, and Google Assistant.

Those bots work fine for navigation, weather, and controlling your music, and when you connect your phone they work seamlessly in the car (you can use the steering wheel voice activation button, for example). Amazon Alexa now works in many Ford vehicles.

The problem is that they don’t really know you're in a car. While Apple phones do know you are driving (an iPhone can interpret the speed and movement and will lock down your phone automatically), no phone assistant today can actually lock the doors on command, change any settings in the car, or do much of anything that’s directly related to driving.

MBUX is different. For an entire week, I took great joy in being able to tell the bot to raise the climate-control by two degrees, change the ambient color, or set the seat warmer to level two.

I only had to say "Hey Mercedes" to activate the bot and make my voice command. The bot can also answer random questions about celebrities or give you the forecast. It’s nice to be able to ask about the weather and then see the forecast in the center display.

In a parking lot at Trader Joe’s one evening, while my wife was inside shopping, I activated the reading light by voice. Then I did it a few more times only because I thought that was really cool.

It’s not so magical in terms of a safety feature or even that high-tech (after all, it’s a reading light), but the fact that there’s now a voicebot that can control settings in the car opens up a whole new world of automation and, eventually, autonomous vehicle control.

Forget navigation and the radio. What I really want is to talk to my car all day. I want to eventually be able to ask the car to drive me home, or to go pick up my kids. “Hey Mercedes, go add some air to the left rear tire” is a dream of mine for autonomous vehicle control. (Whether there will be another bot waiting at the service station to do the fill-up is still an open question.)

I’d like to be able to control all of the lights, all of the safety features, make commands about where to drive even when I’m not in the car, and hand over control for those long and boring stretches of the road when I’ve driving to see family in another state. I’d like the car to talk to me as well. “John, we’ll arrive at your destination in a few minutes, you might want to wake up.”

That’s coming eventually. For now, I was impressed with all of the MBUX features and how easy it was to use for common functions. I’ve officially started talking to my car all day.