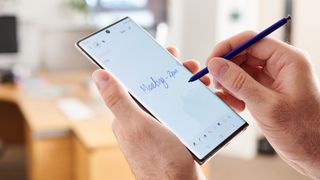 The Galaxy Note 10 Lite could have an even bigger battery than the Note 10 Plus, above (Image credit: Future)

That size – spotted by NashvilleChatter – was listed on SafetyKorea (a South Korean certification database) and attached to a phone with a model number that has been linked to the Samsung Galaxy Note 10 Lite.

Given those previous specs, we’d take this with a pinch of salt, but we have previously heard that the Samsung Galaxy S10 Lite might also have a 4,500mAh battery – so Samsung could be upping the battery sizes for all its upcoming phones across the board.

Speaking of the Galaxy S10 Lite, renders have also leaked courtesy of AndroidHeadlines, supposedly showing both the S10 Lite and the Samsung Galaxy Note 10 Lite.

They match previous leaks, so there’s nothing much new to see here. Key design features include an all-screen front with a punch-hole camera in the top center. The two phones look very similar to each other, though the Note 10 Lite appears to possibly have slightly smaller bezels than the S10 Lite.

We would however take these images with even more salt than usual, as Max J. (a reputable leaker) notes on Twitter that the clock doesn’t use the official Samsung font, or display the time Samsung normally uses. The widget icons are also from an older version of Samsung’s software.

He goes on to say that this doesn’t necessarily mean these aren’t accurate, but that they definitely don’t come from Samsung. Rather, if they’re genuine, they might come from a network or accessory maker.

Such sources may or may not have official design details, but as they match up with earlier leaks they’re probably broadly accurate in any case.