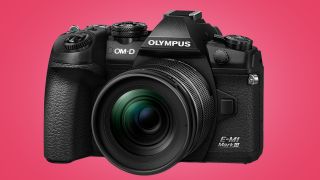 Like snapping sports and wildlife? The new Olympus E-M1 Mark III is one of the most speedy, powerful mirrorless cameras we've seen for a while – and it comes with a pro-level price tag to match.

Like a mini version of the flagship E-M1X, the E-M1 Mark III is a Micro Four Thirds camera for professionals and keen amateurs who prize speed, shooting features and portability above all else.

If you want a more in-depth look at the camera, you can read our in-depth first impressions of the camera in our hands-on Olympus E-M1 Mark III review.

Four Thirds sensors like the one in this camera are smaller than their APS-C and full-frame equivalents, which can make them an acquired taste. But on the plus side, they do allow cameras like the E-M1 Mark III to squeeze in shooting features that would otherwise be impossible in a body this small.

One of those is a boosted in-body image stabilization (IBIS) system that claims to provide 7.5 stops of compensation, allowing handheld shooters to use slower shutter speeds to help keep their ISO low and preserve image quality.

The 20.4MP Live MOS sensor is sadly the same as its predecessor, but is paired with a new TruePic IX processor that powers some impressive AF and software skills, which we first saw in the E-M1X.

These include the 50MP Handheld High Res Shot, which helps landscape shooters get around the 20MP limitation of the sensor, and Face and Eye Priority autofocus, which stems from the 121-point Phase Detection AF.

Other improvements on the Olympus E-M1 Mark II include a new 'multi selector' (otherwise known as a joystick) for quickly selecting AF points, and 'Live ND' for seeing the effects of the in-camera neutral density filter on your snaps in the viewfinder.

Aside from these new features, the E-M1 Mark III shares a lot of similarities with its predecessor, including a weather-sealed magnesium alloy body and its SSWF (Super Sonic Wave Filter Filter) tech, which should keep the sensor free of pesky dust particles.

The camera's 4K video has also been given a minor bump with the inclusion of the flat OM-Log400 profile, which lets more advanced shooters grade footage in post-production.

These prices may sound quite hefty when you can pick up a full-frame Sony A7 III and Nikon Z6 for around the same asking price. On the other hand, the E-M1 Mark III is targeted at different photographers and Micro Four Thirds lenses are considerably smaller and more affordable than their full-frame equivalents.