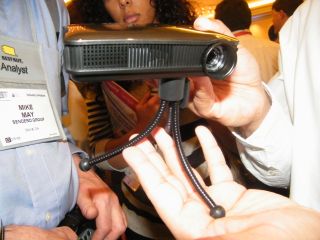 Pico projectors may not have the lustre they had when first released but there's certain companies which keep churning out the pint-sized product again and again.

Optoma is one of these companies and it chose CES Unveiled, the precursor to CES 2012 to show off not one but two pico projectors.

While the ML300 is a decent device, piping out 300 lumens of brightness, it was the Optoma PK32 we were enamoured with – a tiny projector which manages to produce an impressive 100 lumens.

The projector is a stunning study into the miniature. Optoma must have used every inch of its pico knowledge to pack image technology that can throw a 150-inch image into a device that weighs a mere 250g.

As it beams out 100 lumens of brightness, the Optoma PK32 is the most advanced pico on the market. When it comes to its measurements, it's just 4.7x1.2x 2.7 inches, with most of the controls for the device situated on the top.

There's six function keys and a home key – if you use some functions more than others then the projector remembers and allows you to access your most used through single-key access which is more than handy.

The PK32 delivers a contrast ratio of 3000:1 and also has an internal battery so there is no need to tether.

If you do this, though, the projector cuts its lumen output to just 25 lumens which is fine but definitely not top of the class.

Optoma has decided that sometimes you will use the PK32 without a computer so has installed Office Viewer software, which is a nice touch as you will be able to view the likes of PowerPoint, Word and Excel without switching on your laptop.

In our brief hands on with the Optoma PK32, it's easy to see that Optoma has upped its game when it comes to the pico projector world and has thankfully not given up on the small-form format.

The Optoma PK32 is out now in the US and is priced at $449. UK pricing and release date is still to be announced.