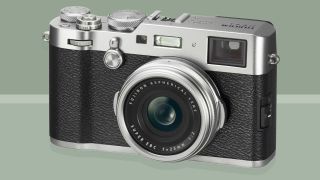 The Fujifilm X100 series is so iconic that it made our list of the most exciting cameras of the decade – and now its fifth iteration, the Fujifilm X100V, is getting closer to launch, at least according to the latest rumors.

Fans love these APS-C, rangefinder-style compacts for their retro simplicity, image quality, and the way the fixed focal length can force you to think more creatively about your photography, rather than spending every waking minute obsessing over the next lens to buy.

The Fujifilm X100V has plenty of improvements to make to the series: we're hoping for 4K video, missing from the current X100F, better autofocus, and an even better lens. But we will get these upgrades? Here’s what we currently know, based on leaked information and rumors.

The Fujifilm X100V is expected to arrive in early February 2020. That's three years after the Fujifilm X100F, and the longest gap between models in the series to date, if only by six months - there was a two-and-and-half-year space between the Fujifilm X100T and today’s X100F.

Our best evidence for this prediction is on the money is Fujifilm’s registration of two new products with the Chinese telecoms agency, MIIT, where products that use standards like Bluetooth and Wi-Fi are listed. These entries were published on January 8, and while they list the new hardware as 'FF190004' and 'FF190005' rather than X100V, we believe one of these is the new X100 family member.

It is, without a doubt, about time we got a new model. And Fujifilm seems to have switched its naming system to classic roman numerals for this fifth generation. The previous 'S', 'T' and 'F' may have seemed random picks from the alphabet, but actually stood for 'second', 'third' and 'fourth'.

The Fujifilm X100V will cost $1,500 (which converts to about £1,150 / AU$2,170), according to the usually reliable Fuji Rumors, which would be a significant jump from the $1,299 / £1,249 / AU$1,900 launch price of the X100F. UK buyers are unlikely to be able to get the camera for significantly under the same dollar figure in pounds either, particularly with further weakening of the currency a possibility.

Fujifilm X100V: what sensor will it have?

No details of the X100V’s sensor have been leaked, but we're fairly sure the camera will use the same 26.1MP chip as the Fujifilm X-Pro3 and Fujifilm X-T3. This is a highly regarded APS-C size X-Trans 4 sensor.

Fujifilm takes this generational approach to its cameras, using the same core hardware across ranges, bar the lower-cost A series.

This also more or-less tells us what focusing system to expect. The 26.1MP sensor has 'focus pixels', an implementation of on-sensor phase detection autofocus.

The Fujifilm X100V is likely to have 425 focus points, like the X-Pro3 and X-T3. These cover 99% of the sensor, and Fuji improved Face and Eye detection when this focus standard was introduced.

Fujifilm won’t necessarily promise the exact same focus performance as those cameras. Certain aspects, like low-light focusing, can be tweaked with firmware, and naturally vary by maximum lens aperture, although now the company has had some experience with this hardware, performance is likely to be similar; the X-T3 can focus down to –3EV, for example, which is very solid.

We'll be interested to see if Fujifilm sticks to the same ISO range as the X-Pro3, though. That camera’s native ISO starts at a relatively high ISO 160. The common ISO 100 baseline standard is only accessible when using an 'extended' ISO setting (along with ISO 100). However, as the X-Pro3 is still relatively new, we'd be surprised if Fujifilm alters this for the X100V.

Fujifilm X100V: will it have a new lens?

The design of X100-series cameras has been pretty consistent since the X100 was introduced in 2011, and we don't think that will change drastically. The clean, retro looks, convenience of the small, fixed lens, and the ability to fit the camera in a larger coat pocket are all crucial to its appeal.

Some whispers from Fuji Rumors suggest the Fujifilm X100V will have a new lens, but that doesn't mean it'll actually be all that different from the optic on the X100F. We're unlikely to see a move away from the 23mm focal length (35mm equivalent), and we’d be surprised if the max aperture goes beyond the current f/2.

So what could change? The X100 cameras are known to be a little soft when shooting wide open at f/2. If an optical refresh could improve this, it would be one of the most significant image quality improvements Fujifilm could make.

There seems little chance of getting to the sharpness level of the brilliant Fujinon 23mm f/1.4 lens used by the interchangeable-lens X-series cameras, but a step or two closer to that kind of performance would be most welcome.

Fujifilm’s mirrorless cameras can seem a little conservative at times. The company has locked onto very successful formulas with the X-T3 and X-T30 families, so why would it want to shake things up?

The Fujifilm X-Pro3 changed things a little recently, though. It has an unusual 'hidden' rear screen that encourages you to shoot in a more traditional manner, without constantly checking the screen. At first, it appears that the camera has no traditional screen at all, just a small color E ink display that shows the virtual film type.

Its full 3-inch LCD screen is underneath this panel. You flip it out, and the design suggests you should use the viewfinder, unless shooting above or below head height, or from an awkward angle. Will the X100V also have this unusual screen style that caters for the purist?

Early rumors suggest it won't, and that we may actually get a more accommodating screen than the X100F. All X100 cameras to date have used fixed displays, with no tilt or touch.

Another possible addition is weather sealing. The Fujifilm X100F doesn't have any official water resistance, and can suffer if you take it out in the rain, which can cause the sensor to start misbehaving or the viewfinder to fog up. This series’ high price means it arguably deserves water resistance, but seals tend to add significant bulk to a camera too, which is naturally a problem on a relatively pocketable model with an emphasis on style.

The same issue makes us assume that the Fujifilm X100V won't have the in-body optical image stabilization that's rumored to be featuring in the Fujifilm X-T4; there’s not enough room to implement it in an X100-size shell, as much as we’d love to see it added.

We may, however, get an upgraded viewfinder. The X100 family uses a hybrid viewfinder that merges an optical, rangefinder-style view with an EVF. This lets you see the exact captured area, and, for example, check zoomed-in portions for captured exposure and white balance while shooting.

This style is highly unlikely to change, but the resolution of the EVF may. Fujifilm upped the X-Pro3’s resolution to 3.69 million dots (1280 x 960 in pixels), and this would represent a significant improvement over the X100F’s 2.36 million-dot EVF. No leaks or rumors have suggested that this will happen specifically, but it's certainly possible given the rise in cost.

Video is one of the primary reasons why the Fujifilm X100F needs to be replaced. Its top capture resolution is 1080p, rather than 4K.

The Fujifilm X-T3 currently offers the best video capture of the Fuji APS-C cameras, with 60fps 4K and 10-bit capture. But the X100V seems more likely to match the Fujifilm X-Pro3, with a max 30fps at 4K resolution.

The camera will be less of an all-rounder than the X-T3, and while it will no doubt be able to produce some nice-looking footage, video is unlikely to become a major focus in the Fujifilm X100V.

The Fujifilm X100 series is certainly due a refresh, and it does look likely that the X100V will be arriving soon – the only real question marks are over the exact features it will bring.

Given that the whole appeal of the X100 family is their size and convenience, it seems unlikely that in-body image stabilization (IBIS) will arrive in the X100V. The latest rumors also suggest that it will continue to have a 35mm f/2 lens, but with improved optics.

More likely new features include 4K video, the 26.1MP sensor seen in the likes of the X-Pro3, and an improved viewfinder. Whether the X100V will include weather proofing or other new features, such as improved battery life, we'll have to wait until February to find out.

We'll bring you all the official news then, but in the meantime we'll be updating this page with all the latest leaks and rumors, so make sure to keep checking back for the latest on the Fujifilm X100V.