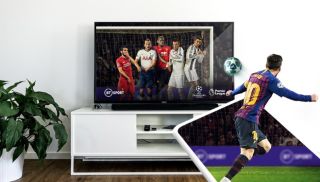 BT is finally offering sports fans the opportunity to take out a standalone subscription to BT Sport for the first time.

Previously, the only way to watch BT Sport was to take out a BT broadband or EE package, or subscribe via the Sky, Virgin Media or BT TV platform. Starting today, customers can pay £25 a month for the full suite of channels and can cancel any time.

Subscribers can watch on their smartphone, tablet or PC, as well as via an Apple TV, Samsung Smart TV, Xbox One or PlayStation 4. BT isn’t expanding this selection just yet but is constantly reviewing its line-up and is open to working with any platform.

The launch coincides with a big month for the broadcaster. On New Years’ Day, BT Sport will show all nine Premier League matches live, while in January it will become the home of WWE, and it hopes to capitalise on this demand as well as changing user behaviours. BT Sport has offered a mobile application since its launch in 2013 and digital viewing is becoming increasingly important.

“It’s a good time to launch a product like this,” Pete Oliver, Marketing MD for BT's Consumer division and the head of BT's digital products and services told TechRadar.

“A lot of people have these devices already and a lot will get new ones for Christmas. We launched our big screen applications earlier this year and we’ve been encouraged with the viewing figures. We’re seeing hundreds of thousands of people watching and wanted to make it easier to get BT Sport on a TV.

“A lot of people have a PlayStation or Xbox in their house already, for example.”

BT is keen to stress that standalone subscribers will gain access to its latest broadcasting innovations, including 4K and HDR – depending on compatibility. Earlier this year, BT launched BT Sport Ultimate – a dynamic channel that offers the best possible viewing experience depending on device and connection speed. BT Sport Ultimate will be available to new subscribers.

The cost of the service is more than a subscription to Netflix or Amazon Prime, the latter of which made its Premier League broadcasting debut last week, but is less than a monthly subscription to Sky Sports via NOW TV.

When asked whether viewers able and willing to pay such a free for live sport would already have Sky Sports and/or BT Sport, Oliver said that the flexibility of the subscription could attract new viewers and that it might encourage “cord cutting” because you don’t need a broadband or TV contract.

“I think it’s competitive,” he explained. “It’s completely flexible so you don’t need to take out a 12 month contract. It’s great if you only want to watch your team in the Champions League but aren’t convinced they’ll go far  or if you just want to watch the MotoGP season. There’s an emerging group of sports fans who don’t want to have a Pay-TV subscription but are happy to drop into sports content.”

One of the main reasons BT launched BT Sport was to encourage consumers to sign up and stay with its broadband service. BT Sport has also been a key offer to EE customers. Oliver said BT not concerned that by offering a standalone subscription, some of the appeal of its communications services would be weakened – especially given BT’s investments in full fibre and EE’s in 5G.

“You still get a better price for BT Sport with BT broadband,” he said. “But if you don’t want that, then this is a good option.”