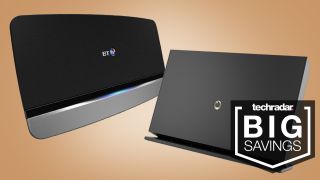 Went a bit mad with the Christmas presents and festive feasting this year and want to kick of 2020 with cheaper bills? By the time you've got to the bottom of this article, you'll know exactly how to begin saving...starting with cheaper broadband deals.

And so that you can start exploring other penny-pinching ways (or, you know, enjoy some family time), we've spent the time hunting around and digging out the cheapest broadband deals around.

But it isn't only about saving cash. If you're a keen streamer, gamer or downloader - or simply have lots of folk in your home all using up the bandwidth at once - then going with the very cheapest internet is a bit of a false economy. That's why we've given you options for fibre broadband deals, too. As you'll see, increasing the speed doesn't even have to cost that much more.

Below are five of the very best deals on broadband you can get right now. They include a very tempting Vodafone plan that upgrades your speed for free, a price reduction from BT and - if price is indeed more of a concern than speed - the very best cheap broadband only deal of them all!

The 5 best broadband deals for the January sales:

1. The cheapest broadband deal around

Post Office Unlimited Broadband | 12 months | Avg speeds 11Mb | Line rental incl. | FREE activation | £15.90pm
Now this definitely isn't the broadband deal to go for if you're having speed issues, but would make a great choice if you're more concerned about price. Getting your internet bill each month and seeing a figure of less than £16 is clearly very attractive, and you'll only be tied into a 12-months contract (unlike some of the offers below).
View Deal

2. Free upgrade for super fast speeds on the cheap

Vodafone Superfast 2 Broadband | 18 months | Avg speeds 63Mb | Line rental incl. | FREE activation | £23pm (or £21 for existing Vodafone customers)
It's a simple offer - get Vodafone's fastest fibre package for the same price as its regular Superfast 1 option. That means speeds averaging 63Mb (great for 4K streamers and even the busiest of households) at a price of just £23 each month - the best price around for speeds of this calibre.
View Deal

Plusnet Unlimited Fibre Broadband | 18 months | 36Mb avg speed | FREE upfront | £21.99 per month + £70 cashback
£21.99 per month for fibre optic broadband is pretty impressive in its own right. But when you consider that Plusnet will automatically give you back £70 in cashback, it becomes phenomenal! It's slower than the Vodafone offer above, but an extra £3 per month gets you up to 66Mb and you still get that £70 cashback.
View Deal

4. Crank up the speed even more

Virgin M100 Fibre Broadband | 12 months | Avg speeds 108Mb | Line rental incl. | £35 activation | £27 per month
If you can get it (and it's quite a big 'if' as Virgin Media broadband is available in around 65% of UK homes) - then the speeds that become available are mouthwatering. With this plan, you now get speeds averaging 108Mb for just £27 a month. That's over double the average speed of most fibre packages, making this a bargain for big streamers and gamers alike.
View Deal

5. Faster speeds for less with BT

BT Superfast Fibre 2 | 24 months | Avg. speed 67Mb | Weekend calls | £9.99 delivery | £34.99pm
For some, it's BT or nothing. And for those people, this will be the best option if it's all about the need for speed. Offering speeds averaging 67Mb at a price of £34.99 - down a fiver from its previous price - this feels like an excellent offer to go for. Not the cheapest out there by a long way, but the one you want if you're a BT devotee.View Deal