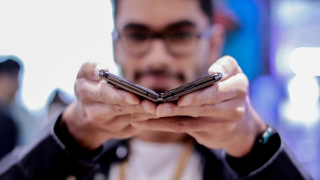 If you were a fan of the Samsung Galaxy Fold from 2019, you can rejoice, because Samsung has not one but multiple foldable phones in the works that will be released over the course of 2020.

This news comes from Samsung itself, albeit in a cryptic way. The company recently posted an analysis of its 2019 earnings to its newsroom, and there are multiple references to 'new foldable devices' and 'foldable models'. The fact that 'devices' and 'models' are both pluralized tells us everything we need to know.

The post also confirms the company will be 'introducing new designs for foldable products', so rumors of the Samsung Galaxy Z Flip clamshell device might not be far-fetched.

We were expecting the Galaxy Z Flip foldable phone to be unveiled alongside the Samsung Galaxy S20 on February 11, with a release date shortly afterwards. We've also heard a Samsung Galaxy Fold 2, succeeding the company's first foldable phone, could come along later in the year.

When we heard those rumors, especially the latter one, we weren't totally sure, since that sounded like a lot of foldables for one year, but this confirmation from Samsung suggests we could actually see a variety of foldable phones in 2020.

Could there be more foldable phones than just the Galaxy Fold 2 and Galaxy Z Flip coming from Samsung in 2020? The name 'Galaxy Bloom' has been circulated, and while we initially thought that was merely a code name for one of the aforementioned devices, there have also been suggestions it could be a unique device.

On top of that, several smartphone companies are expected to launch Z-style foldables which have two hinges to fold in the shape of a Z, and it's completely possible Samsung could have such a handset in the works too.

Though with the obvious Z Flip name being used for a different design it will be interesting to see what Samsung would call such a device.