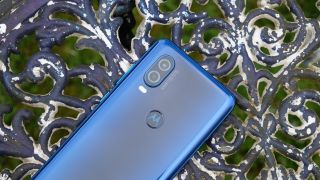 After giving us a nostalgic glimpse of a modern clamshell phone in the Moto Razr 2019, the company is now gearing up to launch the Motorola One Hyper on December 3 in Brazil. It will be the first phone from the company to feature a pop-up mechanism for the front-facing camera and a 64MP primary camera sensor.

The Motorola One range has followed the norm of naming the phone after a distinct camera feature, as we have seen with the One Vision and One Action. However, with the One Hyper, we don't have any information about why it's called "Hyper".

Going by the previous leaks and rumors, here are the key specifications of the upcoming Motorola One Hyper.

The One Hyper is said to feature a 6.39-inch Full HD+ screen with no cutout for a notch. Instead, it uses a pop-up mechanism for the front-facing 32MP selfie camera that's housed in an elevating slider.

It is expected to be powered by Qualcomm Snapdragon 675 chipset, making it a mid-range smartphone, paired with 4GB RAM and 128GB storage.

On the back, the phone has a dual-camera setup with a 64MP primary camera that likely uses Samsung's Bright GW1 sensor, followed by an 8MP depth sensor. The phone has a fingerprint sensor on the back, embedded into its signature batwing logo.

Motorola One Hyper could have a 4,000 mAh battery with support for fast-charging over USB Type-C.