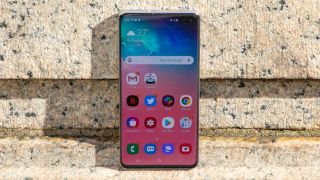 That person is @UniverseIce, a prolific leaker who's correct frequently enough to be taken seriously. Ice Universe posted a simple tweet saying 'Galaxy S20', and then followed that up by saying 'Next year is 2020, and 20 is a new beginning' – the message is clear: they're stating the Galaxy S11 is possibly in line to be called the S20.

This isn't the first time we've heard that the 'Galaxy S11' moniker might be dropped, as in mid-September 2019 a rumor surfaced that in 2020 the Galaxy S, and Galaxy Note, series would be merged into the Galaxy One series. Since then, however, we haven't heard anything to that regard.

So, should you stop frantically searching 'Samsung Galaxy S11' for the latest news, and instead look out for the 'Samsung Galaxy S20'? Well, we're not totally convinced yet that this information is accurate.

Evidence in defence of S11

So far, we've seen no evidence of Samsung having some vendetta against teen numbers, at least to the extent that it'd skip them.

While it's true some other companies have skipped the teens when it comes to phone naming (such as Huawei, which went straight from the P10 to the P20) it doesn't mean Samsung will.

The only real logic  that this could happen is the iPhone 11 series - Samsung might want to miss being seen as launching an '11 phone' a few months after its bitter rival, so a higher number could play well in marketing.

But the real clincher to suggest the S11 name is staying? Since posting the S20 tweet, UniverseIce has referred to the device as the Galaxy S11 again, when sharing images of the protective screen films for each.

Looking at the three protective films, you can compare the sizes of S11e, S11 and S11+. pic.twitter.com/kuDAJCKUViDecember 26, 2019

Still, there's no way to be totally certain what companies will end up doing, and Samsung isn't beholden to any kind of naming convention. We're going to continue to refer to the upcoming phone as the Samsung Galaxy S11 for now, but that could change if enough leaks contradict that.

We'll know for sure what happens come February 2020, which is when we're expecting Samsung to release its new range of Galaxy S phones, but stay tuned to TechRadar before then to see what name future leaks refer to the device as.