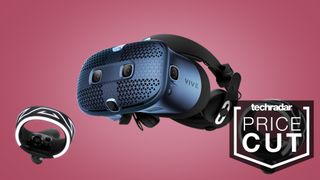 VR headsets can be expensive, can't they? While there are plenty of budget and mid-range options out there – say, the Oculus Go – to really get one of the best VR experiences available today, you'll have to splash out more than a couple of hundred pounds. It's fortunate, then, that Black Friday is upon us, and bringing a whole load of VR headset deals with it.

The new HTC Vive Cosmos has seen a £100 price cut, bringing it down to only £599 – with six free months of Viveport Infinity thrown in too, meaning you get access to hundreds of VR titles without paying another penny.

The HTC Vive Pro, on the other hand, has got a £200 discount for its Full Kit bundle, which throws in sensors for room-scale tracking, as well as two controllers for use with the headset – now for £1,099. We'd seen this price previously back in October, but if you didn't manage to grab it then, now may be the time.

You'll also find discounts on accessories that turn these wired VR headsets into wireless gadgets, meaning you can ditch the cable for more portable play.

HTC Vive Cosmos: £599 at Argos
HTC's rival to the Oculus Rift S is here, and while it boasts some impressive specs, its much higher RRP won't help matters. With this £100 saving though, it may be more within your reach. You can claim six free months of Viveport Infinity too.View Deal

Vive Cosmos Wireless Adapter + Attachment Kit: £303 at VIve
Not keen on the wired connection? This wireless adapter turns your Vive Cosmos into a portable playground – and gives a £100 saving when purchased with the Cosmos Attachment Kit.View Deal

HTC Vive Pro: £599 at Amazon
About three years older that the Cosmos, but still a highly impressive piece of kit. If you already have Vive controllers to put to use, this single headset may be a sensible buy – but otherwise you'll want the either the Cosmos or the Vive Full Kit below.View Deal

HTC Vive Pro Full Kit: £1,099 at Amazon
You're paying through the nose for it, but HTC's premium VR headset is still a brilliant piece of kit – with the Full Kit throwing in two controllers and room-tracking sensors for the full VR experience. View Deal

Vive Pro Wireless Adapter: £315 at VIve
Not keen on the wired connection? This wireless adapter turns your Vive Pro into a portable playground – and gives over £100 saving when bought with the Pro Attachment Kit.View Deal

Vive Pro is now getting on a bit, given it launched in 2016, but it remains one of the best VR headsets we've reviewed. At a time when most manufacturers in the VR space are aiming at market-friendly mid-range models, the Vive Pro is still unapologetically premium.

But it also relies on external sensors for location tracking, unlike the cheaper Vive Cosmos (new for 2019), which uses six embedded cameras in the headset itself. The controllers for the Cosmos are also more gamer-friendly, with additional trigger and shoulder buttons instead of the Pro's trackpad. Both however require a wired connection to a capable PC (specs on their respective product pages), and have equivalent pixel density (1440 x 1600 for the Vive Pro, and 1,440 x 1,700 for the Cosmos).

If you're not in the UK, or want to check out deals on more VR headsets before you make your choice, have a gander below: