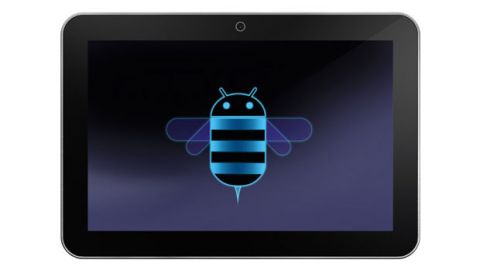 Toshiba has included its own market called Toshiba Places on the AT200, which offers you a range of music, videos, apps, games and books to download.

The same market place is available on Toshiba's internet connected TVs, so some of you may already be familiar with it.

Annoyingly, once you've registered with Toshiba Places you then have to download separate applications for Toshiba's own app (App Center), game (using WildTangent) and ebook (Toshiba ebooks) stores - adding unnecessary bloatware to the AT200.

The dedicated markets are stripped down versions of Google Play and we found them to be pretty useless, opting for the Play Store over them everytime.

Within Toshiba Places you can download music tracks (using 7 digital) and movies (using viewster) - however neither offered a great range of content, with the movie option a real disappointment. And remember - Google Play does movies, and it offers a much better range.

Toshiba has handily included its Media Player app on the AT200 which gives you easy access to all the music, videos, photos and podcasts stored on the tablet.

The Media Player app allows you to connect to other network devices, be that a phone, computer or games console, allowing you to easily transfer content wirelessly between the two.

Unfortunately you can't download music or movies from within the Media Player app, having instead to go to Google Play or Toshiba Places to feed your content hunger.

The 10.1-inch TFT screen lacks the brightness and pop of its super AMOLED rival on the likes of the Galaxy Tab 10.1, but the AT200 still provided us with a good movie watching experience.

The sound via the built in speakers is adequate – with the volume loud enough for a few of your nearest and dearest to huddle round the screen with you, although we found the quality to be better when using headphones.

The video player is part of the Media Player app and provides the basic play/pause, skip and scrub options. If you prefer a dedicated video app head over to Google Play, where you'll have a choice of both free and paid video player apps, such as Play Movies or mVideoPlayer.

The AT200 sports a micro HDMI port, allowing you to hook the tablet up to an HD TV or monitor. Unfortunately though, Toshiba has not been kind enough to supply an HDMI cable in the box, which is a little fustrating.

The Toshiba AT200 also has the Android Music app, if you don't want the fuss of the full Media Player offering. The app is easy to use and displays your music in clear thumbnails – ordered by artists, albums, songs, playlists or genres.

It offers a simple, no-thrills player which will be enough for most users, but if you're someone who likes to fiddle with an equaliser then you're out of luck.

If you're once of those people who loves to sing along to their favourite beats then Toshiba has got you covered, as it's included the TuneWiki app on the AT200.

TuneWiki matches your songs to the correct lyrics, allowing you to hold your own sing-a-long session. You can also share your lyrical experiences with the TuneWiki social network from inside the app too - exciting stuff.

The AT200 uses the stock Android Honeycomb web browser, which provides tabbed browsing, thumbnail bookmarks and an easy-to-use interface.

Toshiba has also pre-loaded Adobe Flash Player onto the AT200, meaning you can jump straight onto the web to watch all those crazy videos you love so much.

As the Toshiba AT200 is Wi-Fi only you won't be able to surf the web while you're on the move, leaving you confined to Wi-Fi hotspots.

The AT200 was able to quickly pick up and connect to Wi-Fi networks, however this speed wasn't always translated in the browser experience.

Web browsing on the AT200 is a generally fluid experience, with no lag while scrolling a page or zooming in. Text re-flow was in action as we zoomed our viewing, allowing for a better reading layout.

We found that content heavy websites took some time to load, with the AT200 struggling to serve up multiple images, banner ads and moving components - a whole 15 seconds to load the famous TechRadar.com!

We weren't left waiting all day and all the content worked once it had loaded, but the wait time was noticeable enough to become annoying.