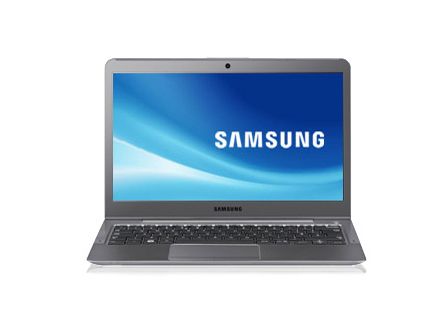 Samsung's first Ultrabook is more affordable than most

Samsung has plenty of experience in crafting slim, powerful laptops, but unlike its premium Samsung Series 9 ultraportable, the Samsung Series 5 Ultra appears to be more of an "everyman" device.

It won't out-power Ultrabook rivals such as the Dell XPS 13, Acer Aspire S3 or Asus Zenbook UX31, and it doesn't look A jaw-droppingly attractive. But importantly, and some would say crucially, it won't cost you the Earth, either.

Considering most Ultrabooks retail for £899-£1,100, this makes the Samsung Series 5 an attractive proposition for anyone on a budget.

Both models pack in mid-level Intel Core i5-2467M processors, but the 14-inch model comes with an optical drive and an HDD capable of being upgraded to an impressive 1TB of storage space.

Our review unit was the smaller 13.3-inch model, but at 20mm in thickness, the Samsung Series 5 Ultra 530U3B is still one of the bulkier Ultrabooks we've seen. It's comparable to the HP Envy 14 Spectre but unlike that machine, the chassis doesn't feel chunky.

It has the sloping, blade-like appearance of other Ultrabooks and weighs a miniscule 1.5kg.

The outward design is attractive without being breathtaking. The plain silver design is equally well placed at home or the office, and the brushed metal finish won't attract smudges the same way a reflective surface would.

Look below the surface, though, and you'll soon notice the Samsung Series 5 Ultra 530U3B has a few tricks up its sleeve. Most notable is the option of including a 500GB HDD alongside a fast-booting 16GB SSD, giving you both space and speed.

The usability of the machine hasn't been ignored either, and the keyboard and touchpad are indicative of Samsung's usual excellence.

Standing out from the crowd of Ultrabooks isn't getting any easier, and whether this - Samsung's first attempt - is strong enough remains to be seen.

It might get noticed thanks to the friendly price, but can the rest of the machine live up to the Ultrabook moniker?