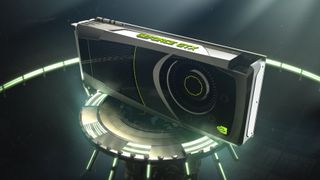 The graphics card war is finally heating up with the release of Nvidia's GeForce GTX 680.

It's been a long time coming, especially considering Nvidia's AMD-shaped competition has managed to launch its entire range of Radeon HD 7000 series cards over the last three months.

But the GeForce GTX 680 is rather a beauty in terms of both graphical performance and power efficiency.

We've got a full in-depth review of both the Kepler GPU architecture and the actual GTX 680 graphics card itself, but suffice to say that it's rather impressed us.

We all expected the performance lead over the AMD Radeon HD 7970 given the time Nvidia has taken getting its top-end GTX 680 out of the door, but the technology and software surrounding the card is equally interesting.

The key technology here is the GPU Boost feature.

Think about Intel's Turbo Boost feature it uses in CPUs, like the Core i7 2700K, and you'll have the general idea.

Basically the GTX 680 has a nominal base clock of around 1GHz, but depending on application power-requirements and system temperature the Kepler GPU can push up its clockspeed.

Given the huge amount of performance headroom in the Nvidia GeForce GTX 680 that's an excellent addition.

The AMD competition does have similar amounts of spare overclocking capacity in them, but you have to get your hands dirty yourself in order to push things further.

We do have a slight, niggling issue with this GTX 680 though, and that's because it doesn't really feel like a GTX 680 in terms of what we've seen from previous generations of GeForce cards.

Because of the low power requirements (just 195w TDP) and the small 256-bit memory bus, this feels like more of second tier, GTX 670-style release rather than the big, beefy cards like the GTX 580.

But because it can outperform AMD's fastest GPU this was all Nvidia currently needed to release at the top end.

Whether there is a speedier, more power-hungry chip humming away in Nvidia's Santa Clara offices we don't know.

Still, having a much smaller chip, with lower power requirements is a good thing, it's just the fact that then we want to be spending second tier money on it rather than the £400+ price-tag that's been slapped on it.

The precedent has been set, whether we like it or not; the fastest single-GPU graphics card of a generation will cost £400+.

And, a few benchmarks aside, that's what we've got – the fastest graphics card of this generation. And possibly the smartest too.