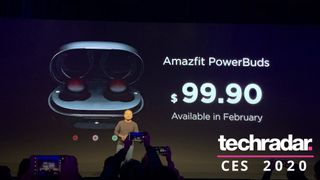 Wearable company Amazfit is breaking out of its mold at CES 2020 with Amazit PowerBuds – true wireless earbuds rugged and waterproof enough to use while exercising or sporting.

Perhaps most impressive of all, they’ll cost much less than top-tier competition, retailing for $99.90 (around £75 / AU$144) and will be available in February.

The PowerBuds do have their own innovations keyed to fitness, like magnetic ear hooks that secure the buds while you’re exercising and can be removed thereafter. They also measure your heart rate in real time and alert the wearer if anything’s awry, and they're 30% lighter than Apple AirPods Pro to boot.

Amazfit is taking a more active role with workouts – they’ll even cheer you on while you’re exercising. There’s also a pass-through mode to hear ambient noise, and IP55 water and dust resistance.

The PowerBuds are sleek true wireless earbuds with panels on the outside to play, abuse, and control via double-tapping (play, pause, take and refuse calls, etc). Amazfit claims an impressive 8-hour battery life, twice that of the AirPods Pro, which extends up to 24 hours with the recharging case.

Oh, and if you want to take Amazfit to bed with you, the company has another product to lull you to sleep: the Amazfit ZenBuds.

These aren’t headphones – instead, they’re smart earplugs that use noise-blocking design with sleep-tracking capabilities, including heart rate, sleep position, and quality, all collected into a report. And they’re 1.78g apiece, they’re three times lighter than an AirPods Pro earbud.

The ZenBuds have 12 hours of battery life, and while they won’t play your tunes, they can play soothing sounds (in Amazfit’s video, these were tranquil piano notes) that will drop their life down to 8 hours. Plop them into their charging case to recharge and you’ll get eight nights before you’ll need to juice up both.