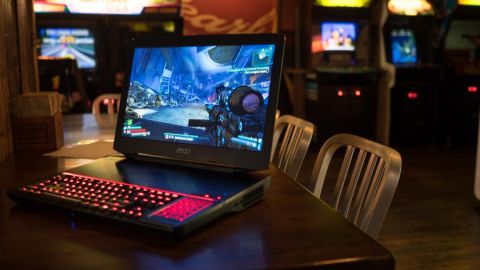 The MSI GT80 is a real treat, with stellar performance, easy upgrades and a mechanical keyboard. However, this gaming rig is a heavy burden on your wallet and back.

This has been an incredible year for gaming laptops, with Nvidia's latest Maxwell graphics cards and two new gaming laptop-desktop hybrids – the MSI GS30 Shadow and Alienware 17. But perhaps the craziest addition of this year has been the MSI GT80 Titan, a larger than life, 18.4-inch gaming rig with its own built-in mechanical keyboard.

That's not a giant typo, either. This gaming laptop comes packing a full-size mechanical keyboard that clicks and clacks with each keystroke.

The GT80 goes above and beyond to give gamers a desktop experience in a notebook, with an Intel Core i7 processor and two Nvidia GTX 980M graphics cards in SLI. However, weighing in at nearly 10 pounds and measuring roughly two-inches thick, this laptop is seriously pushing the limits of what you can call portable.

This is definitely one laptop that stands out from the crowd. For starters, MSI's Titan is a beast of a gaming laptop that eclipses even the massive Asus ROG G751JY. If the GT80's large footprint wasn't enough to attract attention, the design of this laptop just screams gamer from end to end.

Whether it's the various dragon insignias on the back of the screen lid and laptop interior, or the red backlighting that consumes the keyboard, the Titan looks unmistakably like a gaming machine. In this case, that isn't necessarily a bad thing. With a machine like this, you want everyone in the room – or on the convention floor – to know you mean business with a portable rig that can even outperform some miniature gaming PCs.

The Titan also sports a few useful, gamer-oriented flourishes, namely dedicated buttons to turn up the fans to max and switching between GPU modes. The latter of which requires a full restart to swap between discrete and integrated graphics.

Though the MSI GT80 is massive, it's not without its charms. It has a unique design unlike any other laptop before that does away with the palm rest and in its place is a keyboard that sits much closer to the edge. All the machine's components, meanwhile, have been pushed up and tucked beneath an aluminum upgrade panel adorned with the subtle shadow of a dragon.

The laptop frame is also completely solid, despite a primarily plastic construction. That said, MSI made a few smart additions of brushed aluminum to elevate the GT80's aesthetics and make parts of the laptop more robust. The screen lid for instance is backed with one entire sheet of brushed aluminum adorned with an illuminating MSI gaming logo and two red lines to add a distinctive highlight.

The Titan's strange arrangement afforded MSI the necessary room to fit a full-size mechanical keyboard. It's not just for looks, either.

The width, height and even resistance of the keys feels just as responsive as a dedicated gaming keyboard outfitted with the same mechanical switches. The only thing I miss is the ability to raise the keyboard to a more elevated angle.

A real palm rest is sorely missed here, and even with the included foam pad, it's a bit exhausting to keep your fingers sprawled over the laptop's front edge at all times. You can also forget about typing with this laptop on your placed on your lap, as you'll have to assume a Monty Burns-like posture, pecking down at the keys with your fingertips.

While it's a neat feature that makes the laptop look even cooler, you'll have to deliberately look down at the number pad whenever you're using it to make sure you're hitting the right digits. The virtual number pad also fails to recognize my finger pressing on it half the time, and at other times I'm adding unintentional zeroes as I type.

As a regular trackpad, it's more than serviceable despite the unusually tall shape, and it even has two clicky, physical mouse buttons. Still, hardcore gamers will probably want to use a mouse for any serious clicking.