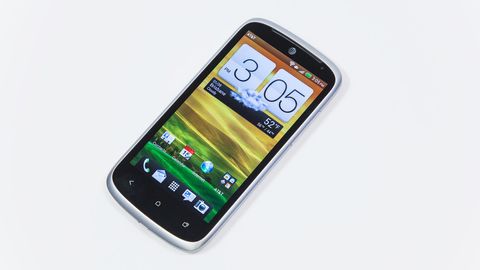 The HTC One VX has the modest specs that come with a modest price tag. It's a dual-core phone in what's fast becoming a quad-core world, but its processor puts up a good fight. Essential specs below:

As we've mentioned, most flagship devices, such as the Samsung Galaxy S3 and HTC's own One X+ have moved up to four cores. However, there are heavy hitters like the Motorola Droid Razr Maxx HD and the iPhone 5 that are still getting it done with dual cores, but they each pack more memory than the One VX's low-end 1GB.

Still, the HTC One VX does pretty well with what it has. Even when loaded with a lot of apps and a few widgets, you can zip across the seven ICS home screens with ease.

It takes several active programs, or a resource sucker like a game, to make the One VX become noticeably sluggish. Background downloads and installations will also bog it down.

With gaming, the One VX performs decently. Games of moderate intensity like the Plants versus Zombies take a bit to load initially, but then perform well. More powerful titles like Asphalt 7 have a long load, and you'll experience some hiccups while playing, especially if Google Play decides to update an app in the background.

The One VX's dual-core performs basic functions like navigating the home screen and browsing the web very well, but when you start to stack multiple applications, you'll detect straining. With a lot of apps filling the VX's memory, newly opened programs are often unresponsive for a few seconds, or they can get stuttery.

It's not a deal breaker, except when you consider that a quad-core device like the One X is only $100 away, with two-year contract price. Using the recent apps function to dump unwanted programs helps a lot, but it's not something you'll have to be concerned with on a more powerful phone. While the HTC One VX performs well for a free phone, we'd say that when you have the opportunity for a cheap upgrade, spend the extra cash for a more powerful device, if you can afford it.

However, the one place where the One VX beats out its more powerful brethren is in battery life. While the HTC One X+ and One X are powerful, media-friendly devices, their quad-core brains and HD screens have them struggling to finish the day on one charge.

The HTC One VX has no such trouble, even when using 4G LTE data. It's no battery behemoth like the Droid Razr HD or Droid Razr Maxx HD, but in all our time testing the phone, we never had to charge it before the end of the day, providing we started out with a full charge.

That's not to say we didn't come close. While a day of texting, calls, web browsing and light video streaming generally left us in the 30 percent to 40 percent zone, a long day of frequent use, plus gaming and Netflix had us in dire need of a charge around 11:00 p.m.

We'd call that solid performance, especially given the less-than-diehard users the One VX is likely to attract. If you don't plan to live on your smartphone and want one that will make it through the day without an afternoon trip to the charger, the One VX is not a bad option.

Battery life is the only category where it truly one-ups its bigger siblings. This is a good thing, since the One VX's 1800 mAh cell is non-removable, and therefore can't be swapped for a fresh one out in the field.

Prev Page Display and Interface Next Page Contacts and Calling