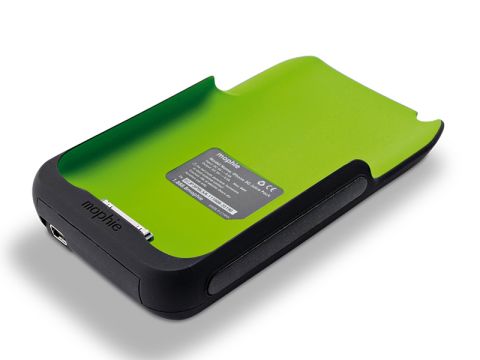 The Juice Pack comes ready-charged, so you can top up your iPhone as soon as you get it

If you're an iPhone power user, this is a great investment. It looks the part, too

This, we like. Rather than the dangle-it-from-the bottom approach of iPhone batteries that we've seen from Kensington and Richard Thalheimer, the Mophie Juice Pack is a battery sled that you slip your iPhone into.

It's a nice idea, not only because it's inherently less fragile than the traditional approach, but also because it offers your iPhone's rear some protection from scratches, too.

It does a good job of extending the time you can last without plugging your iPhone into the wall; its 1800mAh battery is slightly bigger than the iPhone's own, and while it's difficult to give an exact figure, all our tests consistently showed that the Juice Pack effectively doubled your iPhone's battery life, regardless of what you were using it for.

(So, if you get four hours of intensive internet use without the Juice Pack, adding it gives you a little over eight; or the life of the battery if left on standby would go from around 300 hours to 650.)

The design makes the Juice Pack stand out. It's chunky, well-made, and the soft-touch finish to the case feels great in your hand; this finish, however, does begin to rub off on the edges quickly. The bright lime green finish on the internal surface may be divisive, but we love it, and the meter for the Juice Pack's battery on the rear is a nice touch.

It does add a bit of heft to the slim iPhone, it lacks fripperies such as a torch and laser, and there's no on/off switch other than simply sliding the iPhone out. It won't work with most cases, either, and it's hardly cheap. Even so, it gets our recommendation. It's hard to find in the the UK – Juicepack is your best bet for the moment, and the price is not yet fixed.