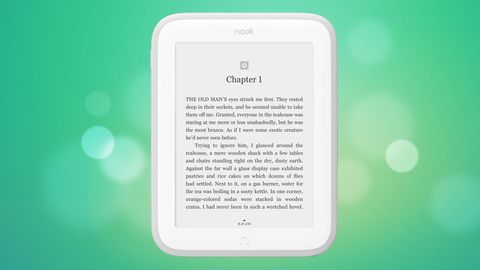 The outlook is bright for the GlowLight

An ereader that competes with Amazon's Kindle Paperwhite on design and price, if not on quality. The decent online library will keep you stacked with titles while the improved screen and backlight make for comfortable reading marathons.

Although not as well known as Amazon's all-conquering Kindle ereaders, the Nook series was the first to bring in a backlight display with the original Simple Touch GlowLight in 2012.

It was well received but, predictably, ousted in sales terms by the introduction of Amazon's own backlight-toting Kindle Paperwhite.

That hasn't stopped US bookseller Barnes & Noble, the company behind the Nook brand, from refining the Simple Touch GlowLight model with a new white design and some enhanced features.

Now known as simply the Nook GlowLight, the new model has been available in the States for some time but has finally arrived in Britain with an easy-on-the-eyes price of £89.

The design remains similar to the original Simple Touch GlowLight, opposing the blocky right angles of the Amazon Kindle Paperwhite or Kobo Aura HD with rounded corners and a soft-touch plastic exterior.

The chassis is edged with a light grey silicon trim and the entire device feels comfortable to hold even for long periods of time.

Nook has shaved plenty of excess weight from the GlowLight in the last couple of years, slimming down to 175g from the 197g of the original Simple Touch GlowLight. As Nook is keen to point out, it's also 15% lighter than Amazon's Kindle Paperwhite.

The Nook GlowLight operates with a touchscreen so there are only two physical buttons. There's the "n" button (the Nook brand logo) on the front of the device at the base of the 6-inch e-ink screen. It acts as a universal home button while using the device and will also activate the backlight after a two second long-press.

The second physical button is a power switch found on the left edge of the device, poking through the silicone trim. A microUSB port is the only connection, found on the base of the GlowLight and acts as a charging port and a means of transferring content from or to a PC.

The touchscreen means the old page-turn buttons have been removed which, in my opinion, gives the whole exterior a sleeker and more appealing design.

The Nook GlowLight uses the .epub open standard format and won't recognise the widely popular .mobi format – meaning you won't be able to transfer any over from your PC if you have them saved locally.

It's not really a problem though as for the most part you'll be buying books, magazines and newspapers directly from the Nook store using the in-built Wi-Fi. There's no shortage either; the UK Nook store currently boasts over three million fiction and non-fiction titles as well as newspapers, comics and periodicals.

It's also worth noting that if you're currently an Amazon Kindle owner, anything you've purchased via Amazon's store won't work on the Nook, and vice versa. That's hardly a surprise, and it could make the difference between sticking with an ecosystem or making the switch.

A slight downside over the previous Nook Simple Touch GlowLight is the omission of microSD expandable storage. Instead there's 4GB of native storage with 2GB of that given over to content from the Nook store, enough for 2,000 titles.

Available to buy from various popular outlets including Asda, Sainsbury's and Currys/PC World, the different design and lower price will appeal to some, but how does the Nook GlowLight stand up when it comes to usability and performance?