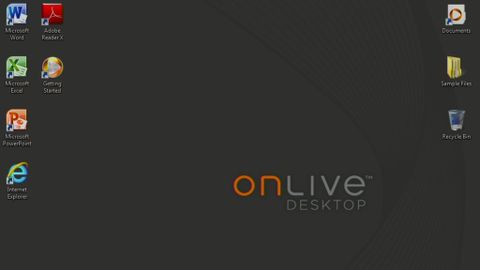 The cloud brings Windows 7 to iPad, but does it stay aloft?

Most users will likely find the free service enough to get the job done, though the fact that server access isn't guaranteed is disappointing. Paying $4.99 a month adds access to the Flash-enabled Internet Explorer and priority access to servers, but with the limited overall feature set and performance issues, that's bound to be a tough sell for many users.

OnLive helped pioneer the idea of cloud-streaming video games, letting you play slick, modern titles without a PC or one of the major consoles. They've since expanded this technology letting you play next-gen titles on smartphones and tablets via a steady Internet connection, and they have since put that idea to new use with the innovative OnLive Desktop.

What OnLive Desktop does is provide a remote version of Windows 7 for use on an iPad (an Android tablet version is also available), offering up free access to Microsoft Word, Excel, and PowerPoint, as well as 2GB of cloud storage for moving files between devices.

Moreover, the company has since introduced OnLive Desktop Plus, an optional paid service with additional features.

Utilizing the standard, free version of OnLive Desktop is as easy as downloading the app from the App Store and signing up for an OnLive account within; your OnLive gaming account will also work, if you have one.

Within moments, your iPad screen will take the form of a Windows 7 desktop, with access to the noted Microsoft Office apps, Windows Media Player, Adobe Reader, Paint, Calculator, Notepad, Wordpad, and a touch-based photo collage app. Internet Explorer is listed, but only the OnLive website is accessible through the free service.

Curiously, the OnLive Desktop app makes no mention of the Plus service, which is priced at $4.99 a month. Loading up the OnLive Desktop webpage from within Internet Explorer on the app similarly offers no details, nor is it noted on the App Store listing. To sign up for OnLive Desktop Plus, you'll need to log into your account on the OnLive website and opt-in from there.

What OnLive Desktop Plus does is provide priority access to servers, which is more than a token promise. Before switching to Plus, we were unable to access OnLive Desktop on multiple occasions due to overstuffed servers. We did not encounter the same issue once the Plus service was enabled.

Plus also opens up Internet Explorer to access the wider web, and does so with Flash enabled – something that isn't available natively on the iPad. As such, you'll be able to watch Flash videos and play games, both of which work well through the browser.

The core feature set is otherwise identical to the free service, though Plus essentially guarantees access to servers and brings Flash-based browsing into the equation, which may be enough to warrant the upgrade for consistent users.

Next Page Features and usability