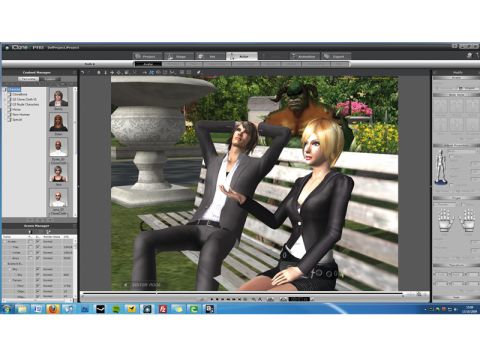 Reallusion iClone 4 Pro pitches itself as an easy-to-use 3D movie creator tool, with the big benefit being that if you can't do something yourself, you can open up the online store and buy it from someone who can.

Can't create a walk cycle? Want more hairstyle choices? Drop a couple of quid and add one to your library. It's a little more complicated than that due to the number of human models on offer, but not by much, and it's certainly easier than firing up a tool such as Google SketchUp or the dreaded Maya to do it yourself – although you can do that too.

The best thing about iClone's online store is being able to sample content. Any item can be downloaded (the screen will be watermarked until you pay up), letting you see if it works in your project rather than having to guess from someone else's thumbnail.

The only downside (ignoring the absolutely abysmal search engine) is that right now, there's very little content – at the time of writing, a handful of hairstyles, a few clothing templates and…

Well, let's just say that our actors' wardrobes so far largely consist of military costumes and comfy-looking clothes for the male character models, low-cut dresses, lingerie and borderline fetishwear for the ladies. Or, to be more exact, one lady – Violet – whose own default costume is half-business, half advertising billboard for her comfy new bra. Please, it's winter. Someone render the poor girl a nice warm coat…

The current lack of downloads aside, iClone is a great platform. The boxed version comes with a tool for importing 3D objects, notably from Google's royalty-free 3D Warehouse archive, which is very helpful, although for some inexplicable reason the downloadable version misses this out.

You can also import PNGs complete with translucency for some extremely quick, good-looking photo textures. In the editor itself, you have full control over everything from facial features to camera effects.

Probably the most interesting part is how iClone handles clothing textures, which it does via a system called CloneCloth.

This is a quick and dirty way to use opacity and diffuse texture maps to reuse the same mesh for multiple purposes – in real terms, a full-length gown can be anything from a miniskirt to a coat, with options such as hue and saturation further tweakable within the editor, and comprehensive restitching available in Photoshop. It's a brilliant idea, especially when tied to the online store.

It's certainly not the case that you can sit down in front of iClone and get instant results. It's a million times easier to get started with than any other 3D tool out there, but there's no getting around the complexity of the task at hand.

Quite often, that's the problem – coming from a world where the likes of UV mapping and balancing multiple generations of human-type models is as natural as water, the app does sometimes seem to forget just how complicated it can be for beginners.

Still, if you fancy yourself as the next Pixar – or, better still, have slightly more realistic ambitions – this is the tool to make it happen.