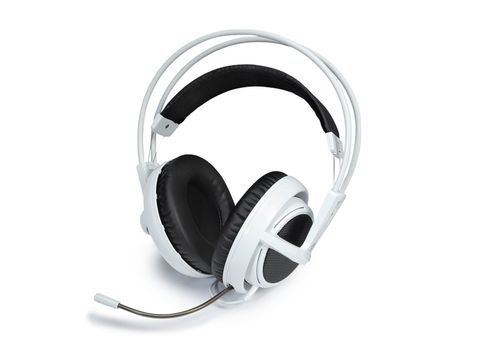 SteelSeries' Siberia headset has been available for the PC and Mac since early last year, but this new version has been revamped to suit iOS devices too.

It now features a single 3.5mm jack, and inline controls for pausing your sounds, taking calls and adjusting the volume, as well as a retractable mic for calls.

The Siberia V2's build quality is beyond reproach. Sturdy and solid, they're comfortable on the ears and remain so even after an hour or two on your head. The mic is perfectly positioned to extend in a hurry when your iPhone rings, and the inline controls are within easy reach too.

Its well-cushioned cans are large enough to completely envelop your ears, cutting out extraneous noise and preventing sound leakage, which addresses our only significant complaint about the Siberia Neckband headphones.

Audio quality is excellent and sound is beautifully shaped. With a decent enough song rip, you feel you're right in there with the band. The level of detail is impressive, with bass, mid-tones and high-end frequencies well realised and integrated. The bass is a little muddy, but not disastrously so, and unlike many headphones and earbuds, it's prominent enough without swamping the mix.

The mic gives excellent clarity during phone calls too, with very little ambient noise and echoes from the cans.

If all you're looking for is a pair of headphones for listening to music, you can get a similar quality for less money. But as an all-round headset, the Siberia V2 isn't to be sniffed at.