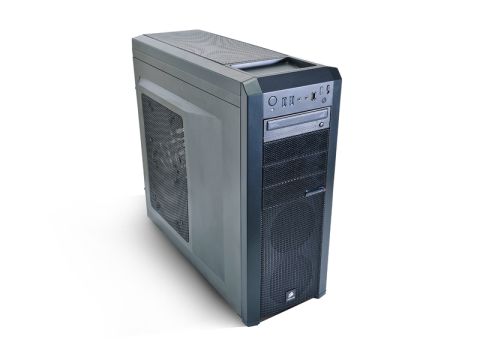 It may be pricey at over £2K, but the gaming performance of the CrossFire setup almost makes it worth it

But no, what we have here is the OCUK Ultima 9450i Mosasaur MKII, a good ol' fashioned straight Sandy Bridge machine with the perfect PC gaming chip thrumming away inside: the Core i7 2700K.

So why the vast price tag considering this top-end Sandy Bridge chip is available for a relatively bargainous £257?

Well, that has less to do with the processing power of this PC and everything to do with the twin graphics power-houses hurling pixels and polygons around inside.

Pairing up two of the fastest single-GPU graphics cards in this beast of a CrossFireX setup accounts for nearly half of its price. A single HIS Radeon HD 7970 costs £500. That makes a staggering £1,000 worth of graphical prowess at your fingertips.

As a single upgrade, we've been a bit down on the HD 7970 for not being quite the new AMD dawn we'd hoped for. Yes, it's a fair chunk faster than its predecessor and speedier than the previous fastest single-GPU card, Nvidia's GTX 580, but not really by the extra £150 you'll have to pay for the privilege.

Over the last few months we've actually seen a lot of high-end, high-price rigs. This is surprising given the current state of the global economy. Still, Intel's tippy-toppest desktop chipset has rocked up, ably supported by AMD's HD 7970, both of which are pricey ol' beasties.

This has given rise to some severe rigs in the £2-4K range, and this Ultima Mosasaur MKII is one of the best – even compared to the likes of the twin GTX 590-sporting, £4,000-costing Palicomp Phoenix Inferno Redline.

Despite having a slightly higher clocked i7 2600K and four Nvidia GPUs humming away inside, the Phoenix isn't far ahead of this Overclockers rig, which costs almost half as much.

The CPU performance is inevitably off the pace against the X79-based machines but, in terms of gaming, even the SLI GTX 580 setup of the £2,500 YOYOTech XDNA Platinum is put in its place.

There are always caveats though, and here it's the constant spectre of CrossFire drivers working with new games and new hardware. For the most part, the HD 7970 drivers worked fine, but no matter what we tried we couldn't get reasonable results from Crysis 2. In fact it came in slower than a single HD 7970.

However, if you're going to spend that much on a PC, why not go the whole graphical warthog? These things in CrossFire are simply blinding.