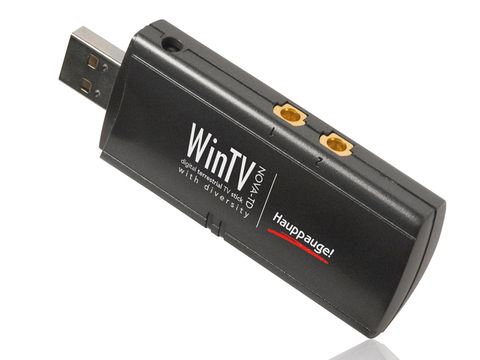 The star feature of the Nova-TD are its dual tuners

A decent enough TV card for your laptop, with some fine features

Hauppauge has ﬁtted two digital DVB-T tuners inside its Nova-TD tuner, which probably explains the relatively chunky nature of this USB device.

It measures 31mm wide, which might cause problems with neighbouring ports unless you use the supplied USB extension cable.

There are two small MCX ports on one side of the tuner which can be used in two distinct ways. You can use a supplied Y cable to split the signal from the aerial on your roof to feed both DVB-T tuners, in which case you can watch one channel while recording another.

Alternatively, you can connect the two portable antennas that Hauppauge supplies to the two ports in a bid to boost the signal from these traditionally feeble pieces of hardware.

When both antennas feed a single DVB-T tuner, it is called Diversity mode with the switch from Dual Tuner Mode and back being handled by a piece of software called the Diversity Applet.

The software works well enough, but WinTV looks incredibly basic these days and has long been overshadowed by Windows Media Centre. We wouldn't consider using it as our TV application, especially considering that MCE is an integral part of Vista.

The dual-tuners in the Hauppauge Nova-TD are highly desirable, but the dual-antennas and software add very little to the value of the package.