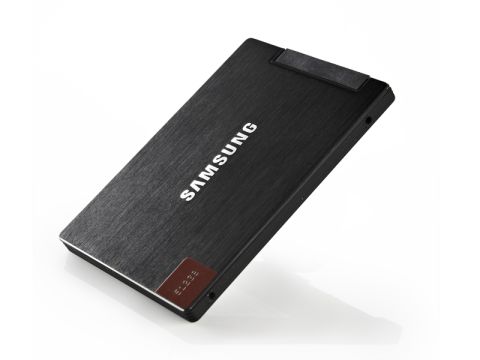 Samsung is one of the largest manufacturers of NAND flash in the world, so you'd expect a great performance from a Samsung solid-state drive.

And there's no doubt that this new model, the latest in Samsung's consumer range of SSDs, certainly delivers.

The Samsung SSD 830 makes significant improvements over last year's 470 models. Controller speed has been improved, and the SATA interface upgraded to the 6GB/s SATA 3.0.

It comes in capacities ranging from the sub-£100 64GB model to this top-of-the-range 512GB drive.

Two bundles are available: a Desktop Kit, featuring mounting brackets and cables, and this Notebook Kit with a useful USB interface for cloning your hard drive to the SSD before fitting.

It's NTFS-formatted out of the box, so reformat it in Disk Utility before you start if you are installing to a Mac. Bundled migration software is Windows-only.

Typically for an SSD, the Samsung 830 gives off almost no heat, is silent in operation and as it has no moving parts, makes smaller demands on your notebook's battery.

It also booted a clean Lion install in a speedy 17.3 seconds – just over half the time taken by the HDD.

Although Samsung's SSD 830 is a little more expensive than most solid-state drives, its performance justifies the asking price.