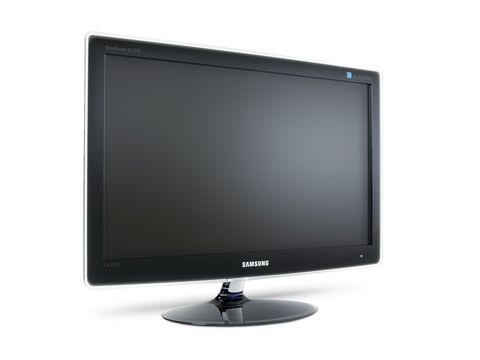 The Samsung XL2370 has some pretty impressive specs - if you believe them that is!

According to the bumpf, the Samsung's XL2370 has got 'Mega Dynamic Contrast', a 'Finger Slim Design' and '2ms Response Time (typical)' . It's almost a new language; one designed to entice consumers into buying products that aren't actually all that different to others on the market.

Let's break Samsung's claims down one at a time. 'Mega Dynamic Contrast' would mean that the contrast ratio is dynamic and, hopefully, 'Mega', resulting in a higher difference between blacks and whites.

Samsung claims a contrast ratio of 5 million to one, which seems like a huge, impossible amount. The blacks were very, very good, but we had trouble counting the 5 million steps between black and white. No, really, we did.

The 'Finger Slim Design' has to win an award for most bullshit phrase put together by a marketing department, ever. How do you define finger slim? What if you have incredibly fat fingers?

Admittedly, the XL2370 is slimmer than Kate Moss's skeleton – as well as every other monitor we've seen – but that only goes for the top two thirds. It smoothly sinks into fatness at the bottom end, like a balloon. A balloon full of lard.

And what of the '2ms Response Time'? This is the amount of time it takes for a pixel to turn from black to white, and while 5ms has become the norm, you won't notice anything less than 8ms. Unless you're a fly.

A slower response time results in smears across the screen, but we can't say we've noticed these on any flatscreen monitor in the past couple of years.

Ignore the grand claims, though, and Samsung's monitor is really rather spiffing. It's just the right size: large enough for gaming, but not so massive that it feels like you're sitting in the front row of an IMAX cinema.

The 16:9 aspect ratio means that it's wide enough to get all of your game on it. And, in spite of it being a tad wobbly, its translucent stand, shiny bezel and touch-sensitive controls combine to make its looks resoundingly impressive.

A while ago, Dave looked at Hanns.G's £184 24-inch behemoth and loved it, despite the black gradients being not all that special (something easily forgiven at that price). Samsung's offering lies at the other end of the monitor see-saw: a more expensive, smaller screen but with a stronger image.

So if you're a gamer who wants masses of screen real estate for a low price, we suggest you go for the Hanns.G. But if you're after a lush picture and use your PC for occasional photo editing or web design, then look no further than the Samsung option. Just ignore the blurb.